Thousands attend Tel Aviv tourism summit, including representatives from around the world. 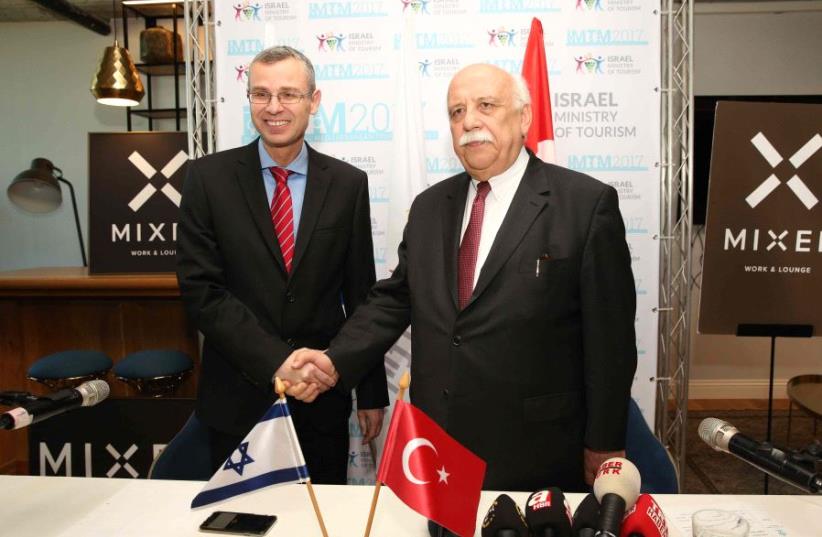 Yariv Levin and Turkish Culture and Tourism Minister Nabi Avci meet at the the opening of the International Mediterranean Tourism Market on February 7, 2017
(photo credit: CHEN GALILI)
Advertisement
Hours after a strongly worded condemnation of settlements by the Turkish Foreign Ministry on Tuesday, Turkish Culture and Tourism Minister Nabi Avci attended a tourism conference in Tel Aviv, marking the first visit to Israel since ties between the two countries were normalized last August.Speaking at a press conference, Avci was optimistic that visits by Israelis to Turkey will drastically increase.“Tourism is an excellent way of meeting people and strengthening the connection between them,” he said. “Through tourism, the connection between the countries can be improved.”Avci said he believes it is possible to increase the number of Israeli tourists to Turkey to 600,000 from around 260,000 last year.Over 500,000 Israelis traveled to Turkey in the peak years, prior to the 2010 Mavi Marmara flotilla incident.The cessation of diplomatic ties following the flotilla incident, however, as well as numerous terrorist attacks in Turkey, disrupted the flow of tourism.Avci will also travel to the Palestinian Authority during his two-day visit to meet Palestinian Cultural Minister Ehab Bessaiso.Tourism Minister Yariv Levin said there is “a new era of tourism to Israel. The higher budgets and resources spent in the sector are raising the number of tourists visiting Israel.”Levin also praised Israeli-Turkish relations, saying, “The stronger that Israel and Turkey are, and the stronger the relationship between our countries and our people are, the more stable the overall situation in our region is.”The two ministers met at the opening of the International Mediterranean Tourism Market, a conference that showcases Israeli and regional tourism industries.Ten tourism ministers from around the world participated in the conference, which concludes on Wednesday.Ministers and senior tourism officials from Italy, Kenya, Madagascar, Norway, Romania, Sri Lanka, Tanzania, Zanzibar, Ethiopia, Lithuania, the Philippines and Kazakhstan were in attendance, among others.Speaking to The Jerusalem Post, Sri Lanka’s Tourism and Christian Religious Affairs Minister John Amaratunga said he hopes to promote Sri Lanka as an emerging tourism destination for Israelis. “Jewish traders visited Sri Lanka in the 8th and 9th centuries, so we have a long relationship with Israel,” said Amaratunga. “I’m trying to get Israelis to visit Sri Lanka.”The number of Israeli tourists visiting Sri Lanka increased 34% in 2016 to 10,391 visitors, which was the largest percentage increase in foreign tourists to Sri Lanka, according to the Tourism Ministry. But this is still a minuscule percentage of the approximately 2 million tourists to visit the island nation in 2016.Nobuko Goto, director of the Tourism Exchange Division of the Wakayama Prefecture in Japan, said she is seeing a steady increase in Israeli tourists to the Wakayama region. “Israelis like new places,” Goto said. “Israelis are visiting and the number is rising.”