Chairperson of the Strauss Group food empire and chamber chairwoman Ofra Strauss sat down with the ‘Post’ and gave her own take on the state of US-Israeli relations and where they're headed. 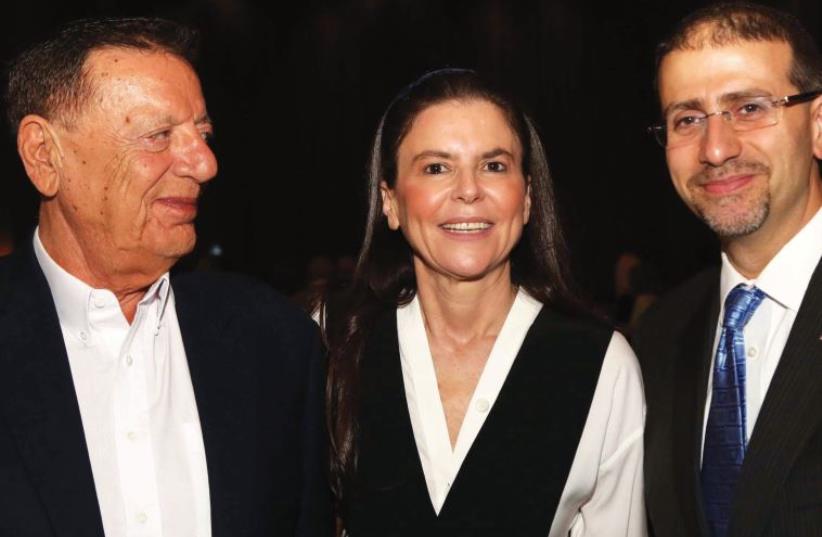 Ofra Strauss poses with her father and US Ambassador Daniel Shapiro at the anniversary gala
(photo credit: ISRAEL-AMERICA CHAMBER OF COMMERCE)
Advertisement
The room is filled with the movers and shakers of the Israeli and American business worlds and they’re dressed to impress. The men (and some women who went the elegant pantsuit route) are proudly wearing pins with the US and Israeli flags pinned to their lapels. Renditions of both “The Star-Spangled Banner” and “Hatikva” precede the evening’s comments. And, at the end of the night, when Israel-America Chamber of Commerce chairwoman Ofra Strauss toasts the next 50 years of relations at the posh gala dinner last week night, a marching band waltzes in playing – what else? – “When the Saints Go Marching In.”It was if the tension between Jerusalem and Washington and the never-ending diplomatic ping-pong between Prime Minister Benjamin Netanyahu and US President Barack Obama simply didn’t exist.And perhaps in the business world at least, it doesn’t. After all, business ties are stronger than ever with bilateral trade at $38 billion and Israel ranking 24 out of the 25 countries that export to the US.“Presidents, prime ministers stay for four or eight years, but we are here much longer,” Strauss said from her office in Petah Tikva ahead of the grand event.As part of a delegation of leading business executives worldwide, Strauss met with Obama just a few days after Netanyahu’s controversial congressional address, and even then – when the issue was as fresh as can be – she did not feel any tension when discussing business.As for the relations between the two leaders themselves and what it means for the all-important strategic cooperation in the future, Strauss remains unconcerned.“I think that this type of discussion on the Iran issue is a legitimate one,” she said. “[The discussion] was on the merits of what Israelis thought and think.This is about our life, our existence. When you talk about our existence, it’s fair enough to fight on your views. Whether it be in Congress, in newspapers, that’s how democracy works. I’m not frightened that discussions like that ruin relationships.”We should worry, Strauss argues, when there is no discussion at all.“When we don’t see in the news any discussion of American leaders talking with Israel or vice versa, then we’ll know that there’s something really wrong.”As far as business is concerned, Americans and Israelis were destined to make money together.“Israelis love English,” she gushes when asked what she thinks is behind the natural affinity the two peoples have for each other.Our shared democratic values are another reason why the symbiotic relationship works and the shared core values also explains why we are so intertwined with one another, according to Strauss.“We are a young country, the US is as well. We are a country of immigrants, the US is as well. So innovation, if you’re governed in the right way and you’re a country of diversity, you can create a certain type of innovation that is really ground-breaking because you’re not bogged down by those thousands of years of history,” she said.US Ambassador to Israel Dan Shapiro, who attended the dinner agreed with that assessment, saying that the two pillars holding up Israeli-American relations are shared strategic interests and “our common values and moral bonds.”As the chamber is marking 50 years of fostering trade between the two nations – as well as the 30th anniversary of the signing US-Israel Free Trade Agreement – Strauss asserts that this is really only the beginning.“I think we’re just getting started in commercial  ties. If it started with political ties... [then] commercial ties will be the ones that will hold it together, because they are really long-term,” she said.When asked if she thinks the threat of the Boycott, Divestment and Sanctions movement can possibly mar future business ties with American companies, she, too, remains unconcerned.“We in the business world, with the Israeli government of course, we can face it,” she said, adding that with Europe saddled with a migration crisis and the Arab region in turmoil boycotting Israel will be the least of their priorities.“I think this whole boycotting Israel will just be less relevant now with what’s going on in Europe and the Arab world and it will call for a completely different action,” she argued. “Yes, we still have those issues that we need to correct and we can be better, but when it comes to doing business with Israel, boycotting us is not the way to really influence what we’re doing.On the contrary, they should do business with us and really make Israel part of the world.”During his remarks at the dinner, Shapiro said that these shared economic endeavors “gives all of our citizens in both countries the ability to the lead a more prosperous life.”That in itself then, is something worth celebrating.