Despite cease-fire: IAF hits Gaza after rocket in Netivot

By YAAKOV LAPPIN, JPOST.COM STAFF
MARCH 14, 2012 04:15
IAF airstrike Gaza_311 reuters
(photo credit: Ibraheem Abu Mustafa / Reuters)
Advertisement
The Israel Air Force struck two targets in the Gaza Strip overnight Wednesday, in response to Palestinian terrorists' violation of an informal cease-fire agreement with Israel. The fragile hours-long calm came after four days of violence in the South, with over 200 rockets fired from Gaza and 26 Palestinians killed in IAF strikes, 22 of which were terrorists. The hostilities which began on Friday when the IDF killed two Islamic Jihad terrorists that Israel charged were plotting a cross-border terror attack from Sinai.The Wednesday strikes, which registered direct hits, came in response to a Grad rocket fired into the southern town of Netivot. One man, approximately 40 years of age, was lightly injured in the attack and 11 other local residents suffered from shock. On Tuesday evening, two rockets landed in the Ashkelon Coast Regional Council area, marking the first such attacks since midday. No injuries or damage were reported in the attacks. Speaking via video feed from an Iron Dome battery protecting Ashdod to a New York fundraiser, IDF Chief of Staff Lt.- Gen. Benny Gantz said that rocket attacks such as the one in Netivot would be met with Israeli air strikes. "If the fire continues, we will respond as we did before. We managed to kill 22 terrorists in recent days, and as of now the terrorists have been decimated."Gantz's comments followed similar statements made Tuesday by Prime Minister Binyamin Netanyahu, who said that “quiet will bring quiet,” but warned Israel would strike anybody trying to attack it. School was scheduled to be back in session in the South on Wednesday after rocket attacks from Gaza kept students at home for the past three days.The Home Front Command made the decision to send children back to school after consulting with the heads of local authorities in Beersheba, Ashdod and Ashkelon.Schools had been cancelled in all towns and cities located between 7 km to 40 km from the Gaza Strip. The decision applied to the cities of Ashkelon, Ashdod, Beersheba, Netivot, Sderot, Kiryat Malachi, Gadera, Rahat, Yavneh, Lakiyeh, and the Gan Yavneh Regional Council. 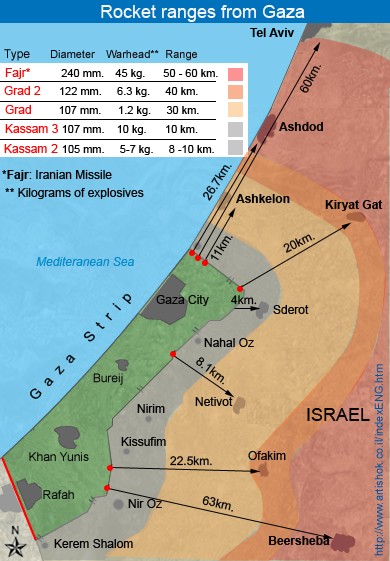 Rocket ranges from GazaPalestinian media reported on Tuesday afternoon that the IDF shot and injured three Palestinians that approached the Gaza security fence during a funeral procession for two terrorists that were killed in an IAF strike a day earlier. The funeral was for Islamic Jihad members Bassam al-Ejla and Mohammed Daher.The IDF said that some fifty Palestinians came close to the security fence, and that they fired in order to distance them.An Egyptian security official told Reuters on Tuesday that both sides had "agreed to end the current operations," with Israel giving an unusual undertaking to "stop assassinations," and an overall agreement "to begin a comprehensive and mutual calm."

"There is an understanding," Homeland Defense Minister Matan Vilna’i told Army Radio Tuesday morning. "At the moment the direction is toward calm and it appears, unless there are last minute developments, that this round is now behind us."Also Tuesday morning, an Islamic Jihad spokesman said the group would respect the quiet as long as Israel stopped assassinations of terrorist leaders, saying it would respond if more assassinations take place.
Advertisement
Subscribe for our daily newsletter