Speaking at annual IDF ceremony at Yad Vashem, Chief of Staff says Israel must defend its borders as well as Jews worldwide.

By JPOST.COM STAFF
APRIL 16, 2012 12:38
Gantz speaks at Yad Vashem 370
(photo credit: Marc Israel Sellem)
Advertisement
Israel can and must protect its own borders as well as Jews around the world, IDF Chief of Staff Lt.- Gen. Benny Gantz said Monday at an IDF seminar at Yad Vashem Holocaust museum three days ahead of Holocaust Remembrance Day."Today we stand against any threat with an army that is capable of beating all its enemies. We must defend the borders of Israel and all its communities, but we must also look around and pay attention to every place where a Jew is harmed for being guilty of nothing but his Jewish identity," Gantz said. 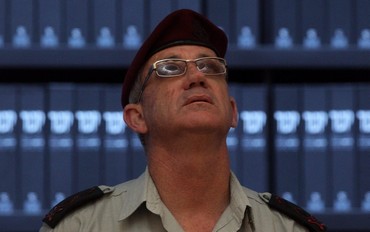 "If a Jew is beaten on his way out of a synagogue in Kiev; if Jewish children in Toulouse are murdered in cold blood; if in India, Thailand and Georgia hostile elements try to harm Israeli and Jewish targets - we must stand firmer than ever," Gantz stated.  The seminar day - which has become a tradition in the IDF - this year focused on instilling the memory of the Holocaust in Israeli society, and specifically in the army. During the seminar a special memorial ceremony was held in the Hall of Names.
Advertisement
Subscribe for our daily newsletter