Nasrallah accuses Israel of assassinating Hassan al-Laqqis, a senior operative with the organization, earlier this month. 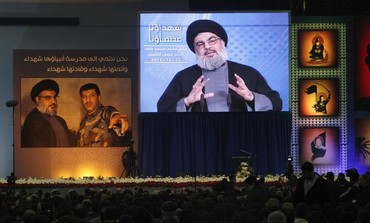 Hezbollah chief Hassan Nasrallah addresses supporters via broadcast in Beirut.The head of the Lebanese-based Shi’ite militia Hezbollah vowed retribution against Israel on Friday for the killing of one of his most trusted aides earlier this month.Hassan Nasrallah, the secretary-general of Hezbollah, accused Israel of assassinating Hassan al-Laqqis, a senior operative with the organization who was believed to have commanded Hezbollah forces fighting in Syria.Earlier this month, al-Laqqis was shot in the head from close range outside his home in the Hadath district of Beirut. Hezbollah immediately accused the Israeli government of masterminding the hit, a charge which officials in Jerusalem flatly denied."All evidence indicates that Israel is behind the assassination,” Nasrallah said on Friday in a televised tribute to al-Laqqis. The Hezbollah chief praised al-Laqqis as “one of the brilliant brains of the resistance.”
"All the indicators and clues points to the Israeli enemy," Nasrallah said, in his first public comments since the attack."Our killer is known, our enemy is known, our adversary is known ... When the facts point to Israel, we accuse it," he said in televised remarks to supporters in southern Beirut. Israel has denied any role in the shooting and hinted that the motive may have been Hezbollah's military support for Syrian President Bashar Assad in his war with mainly Sunni Muslim rebels. The 2-1/2 year-old civil war in Syria has polarised the Middle East between Sunni Muslim powers, such as Turkey and the Gulf Arab states who support the rebels, and Shi'ite Iran and its Lebanese ally Hezbollah, who back Assad. The president's Alawite faith is an offshoot of Shi'ite Islam. Hezbollah has sent several thousand fighters to Syria, helping to turn the tide in Assad's favor this year. But Nasrallah said on Friday that would not prevent it from avenging the killing of al-Laqqis. "If the Israelis think ... that Hezbollah is busy and that Israel will not pay the price, I say to them today, 'You are wrong'," he said. "The killers will be punished sooner or later and the blood of our martyrs - whether large or small - will not be wasted. Those who killed will not be safe anywhere in the world. Vengeance is coming." The open role of Hezbollah fighters in the Syrian civil war and the steady flow of Lebanese Sunnis joining the anti-Assad rebels have fuelled sectarian strife in Lebanon. Car bombs killed dozens of people in Beirut in August and a twin suicide attack on the Iranian embassy in the Lebanese capital killed at least 25 people last month. But Nasrallah mocked critics who he said blamed Lebanon's woes - from sectarian tension to the flooding of a road during winter storms - on Hezbollah's intervention in Syria. "Why isn't there a government? Because Hezbollah entered Syria. Why haven't we held elections? Hezbollah is in Syria. Why is the economic situation like this? Hezbollah is in Syria. Why did the tunnel on the airport road become a lake? Because Hezbollah is in Syria. This of course isn't logical." “This has strictly nothing to do with Israel,” Foreign Ministry spokesman Yigal Palmor said earlier this month. “Hezbollah has made a fool of itself in the past with these automatic and groundless accusations against Israel.... If they are looking for explanations as to what is happening to them, they should examine their own actions.”Israeli security sources speculated that the motive for the hit may have been Hezbollah’s guerrilla support for Syrian President Bashar Assad in his war with Sunni rebels.A previously unknown group, Ahrar al-Sunna Baalbek Brigade, claimed responsibility for the attack in a message on Twitter. The claim could not be verified, but the name of the group suggested Lebanese Sunni connections.Three or four assailants ambushed al-Laqqis, according to Lebanese security sources quoted by Lebanese Broadcasting Corporation International.Al-Laqqis was “very close” to Hezbollah leader Hassan Nasrallah, a Hezbollah source told the Turkish Anadolu Agency.“Al-Laqqis was involved in scientific development and played a key role in developing Hezbollah’s unmanned aerial vehicles program,” a source close to the movement told The Daily Star.
Advertisement
Subscribe for our daily newsletter