By HERB KEINON, JERUSALEM POST STAFF
APRIL 21, 2014 14:07
IAF jet 370
(photo credit: REUTERS)
Advertisement
The air force bombed terrorist targets in the Gaza Strip on Monday following a Palestinian attack on ground forces and rocket attacks on southern Israeli communities.Although some damage was reported in Sderot, no one was hurt by the rockets.Fighter jets struck three targets accurately and returned to base, the IDF Spokesman’s Office said.Reuters cited medical sources in Gaza as saying Israel’s strikes lightly wounded two Hamas gunmen.Earlier on Monday, terrorists in Gaza fired seven rockets into Israel during the last day of Passover. The first three projectiles struck uninhabited areas in the Sha’ar Hanegev region, activating Code Red sirens. No damage was reported.Two other rockets launched from Gaza caused light damage to a street and several stores in Sderot. 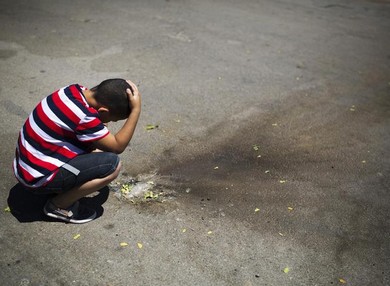 Shrapnel at a parking lot in Sderot from a rocket fired from Gaza, April 21, 2014. (Reuters)According to Army Radio, the Iron Dome system intercepted at least one rocket.Prime Minister Binyamin Netanyahu reacted harshly to the rockets on the South and the IDF’s swift response.“Today the IDF hit in the Gaza Strip those who wanted to harm Israeli citizens and violate the peace of the holiday,” he said in a Facebook posting. “We will continue to act aggressively against the enemies of Israel to ensure security for our citizens. We will hit anyone who seeks to harm us. That’s what he have done, and that’s what we’ll do.”Speaking at a Mimouna celebration in Or Yehuda on Monday night, Netanyahu said Israel wants true peace with the Palestinians, but it is the Palestinian Authority that must now decide what it wants.“We see that the PA, which yesterday was talking about dismantling itself, is today talking about unity with Hamas,” he said, referring to reconciliation talks in Gaza between the two sides over the weekend. “When they decide whether they want to disband or unity with Hamas, or peace [with Israel], they should let us know.”IDF spokesman Lt.-Col. Peter Lerner said “rocket terrorism is an intolerable reality Israelis should not have to accept.”“Israeli civilians celebrating the Passover holiday woke up this morning to the sound of Code Red alarms and rockets,” Lerner said. It is our obligation to seek out and target those who wish to attack our civilians and soldiers and to eliminate their capabilities.”Early on Monday morning, a rocket-propelled grenade was fired at soldiers on the border with the Strip, with no casualties, the army said. Soldiers subsequently fired warning shots into Gaza, which caused no known injuries.About a hundred rockets fired from Gaza have hit southern Israel since the beginning of 2014, according to the army.