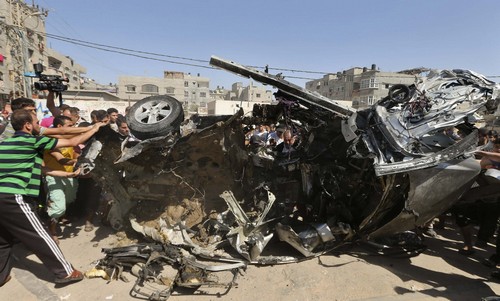 The IAF attacked four terror targets in Gaza early on Saturday morning, the IDF Spokespersons office said. The IDF confirmed direct hits on all four targets. On Friday evening, the Iron Dome anti-rocket battery intercepted two incoming projectiles over the Ashkelon region. The Palestinian rocket fire came just hours after an Israel Air Force strike in northern Gaza on Friday killed two Popular Resistance Committees members who were involved in rocket attacks on Israel.Usama Hasumi and Muhammad Fatiah had in recent weeks taken part in the firing of rockets, and in recent days, planned to carry out "severe terror attacks against residents of the state of Israel," the IDF said in a statement. "The IDF will continue to act with determination as much as is needed against any element that carry out terrorism against Israel. The Hamas terrorist organization, and all of its branches, is the address, and it is responsible," the army added. Prior to the interceptions, four Gazan rockets exploded in open areas in the Eshkol region, failing to cause injuries or damages. The IDF is investigating whether a fifth rocket also fell in southern Israel.Defense Minister Moshe Ya'alon said southern Israeli communities had suffered rocket fired launched by the targeted terrorists, adding, "We don't intend on ignoring any [rocket] fire on Israel, or any attempt to harm our civilians and IDF soldiers. We will pursue and strike with a mighty hand anyone who does this or plans to, as we've done today. We see Hamas as responsible for what happens in Gaza, and it should not test our patience or determination."Ya'alon said Israel will continue to act "responsibly and with good judgement to allow residents who live near Gaza, and the southern communities, and Israeli civilians in general, to continue with routine life."On Tuesday, the air force bombed seven targets in the Gaza Strip in response to three rocket attacks against southern Israel. The Iron Dome anti-rocket battery intercepted 2 rockets south of Ashkelon, and a third fell in open territory in southern Israel. Targets in Gaza that were hit by the air force included five underground rocket launchers, and two terrorist facilities that were used as weapons depots.A number of the targets hit in Gaza belonged to Hamas, a senior security source said. "This is exactly the issue of sovereignty. Israel will act firmly against terrorists firing rockets from Gaza at southern Israel, Defense Minister Moshe Ya'alon vowed on Wednesday, during a ceremony at an officer's training base in the South.Addressing newly graduated officers, Ya'alon said, "The reality you will encounter in the Middle East as commanders in the IDF is turbulent, evasive, and it demands that all of us be open to changes, and to understand the depth and significance [of the changes]."The officers will also encounter highly armed, trained, relentless terror organizations that are replacing states, and a reality in which "terrorist elements in the Gaza Strip test our patience with a drizzle of rocket fire at southern communities – a drizzle we will not tolerate," said the defense minister.