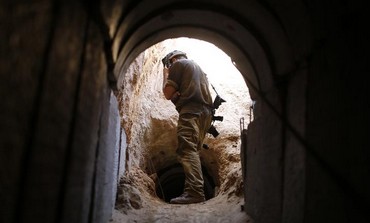 An Israel Air Force missile struck the entrance to a Hamas attack tunnel, hidden under a Palestinian hothouse in Gaza, at approximately 5 a.m. on Friday.The strike killed three senior Hamas commanders who were in a parallel tunnel that was linked to the targeted tunnel. The men were senior experts in tunnel warfare from Hamas’s Khan Yunis Division. One was also a rockets expert.
The IDF had uncovered the 1.7 kilometer-long attack tunnel leading from Khan Yunis into Israel, complete with an electrical supply and phone lines, on October 12.In a different section of the attack tunnel on Thursday night, an IDF drill that was digging into the tunnel to destroy it triggered a bomb planted inside, leading to the injury of six soldiers.Hamas had planted the bomb – made up of explosives and diesel fuel – on the Gazan side of the tunnel in October, a few days after the IDF exposed the structure, the army believes.The bomb was intended to kill, maim or facilitate the kidnapping of soldiers that Hamas expected the IDF to send into the Gazan side of the tunnel to destroy it, the IDF said.Instead, the army chose to destroy the tunnel from above ground, sending a task force composed of soldiers from the Yahalom elite Combat Engineering Corps unit, the Golani infantry brigade and the 401st Armored Brigade over the security fence, a hundred meters into the Gaza Strip, for that purpose.“The drill set off the bomb, creating shock waves, which injured the soldiers. We would never send our soldiers into the tunnel before mapping it out with dogs and robots first. We didn’t reach that stage in the operation,” a senior army source said.“The blast injured six soldiers and commanders, one seriously and the remainder lightly. No one is in a life-threatening condition,” he added.“Last night, we acted offensively in regards to the terror tunnel we exposed,” an army source said. “We believe that as soon as Hamas saw that we uncovered its tunnel, it planted the explosive. We prepared for this possibility. We will investigate this incident – I’m sure we will learn from it.”The IDF’s aim, he continued, is to reverse Hamas’s advantage in tunnel warfare.“Hamas thought its tunnel was a secret. We showed it we have the ability to expose it... and we helped Hamas understand that their tunnels can go from hideouts to graves,” he said. “We’re investing a lot into combating tunnels and exposing them, including the introduction of new technologies for this.”The IDF believes that Hamas will not respond to the recent incidents, due to Israeli deterrence and the Islamist movement’s growing financial troubles and regional isolation. “I don’t see any preparations by Hamas to act,” the source said.He described the demolition of the tunnel as an impressive achievement that was completed despite “disruptions to the chain of command.”“Last night, we found that despite the shortage of diesel fuel for Gaza’s power plant, Hamas is diverting the fuel to create bombs, just as it used Israeli concrete sent into Gaza for the civilian construction sector to build the terror tunnel,” the source said.The IDF has placed Iron Dome air defense batteries around southern communities in preparations for the possibility of an escalation. But following an evaluation held on Friday morning, it decided to instruct civilians in the South to proceed as normal.The tunnel might have been intended for attacking or kidnapping soldiers, or for moving terrorists into Israel to kill civilians in border communities, army sources said at the time of the discovery.It took Hamas more that a year to complete, and is tall enough inside to allow people to stand upright. The tunnel is buried some 20 meters underground as it crosses the Gaza border.The security source said it was the most-well-designed terror tunnel the IDF had found to date.One of the wounded was a team commander overseeing demolition work. Five of the soldiers were airlifted to the Soroka University Medical Center in Beersheba.“Despite the injuries, we continued the mission until its completion,” the source said. The IDF inserted new commanders to replace the wounded, and oversaw the completion of the drilling operation.Just after the drill set off Hamas’s bomb, the IDF identified a terrorist cell spying on the army’s activities from a distance of just over a kilometer away, in Khan Yunis.The cell included one man armed with an antitank missile launcher and a second who acted as a lookout. An Israeli tank fired a shell in their direction, killing one terrorist and seriously wounding a second.The IDF then lowered a 2,800-kilogram bomb into the drilling site, 90 meters inside Gaza, and detonated it, leading to the tunnel’s collapse shortly before 11 o’clock on Thursday night.Israel allowed the Palestinians to recover two of the four bodies of Hamas fighters the IDF killed on Friday in the tunnel, Channel 2 cited Arab sources as saying.Israel gave the okay after Egyptian mediation, the sources said.Israeli officials did not confirm the report.Jerusalem Post staff contributed to this report.
Advertisement
Subscribe for our daily newsletter