At this stage there are more questions than answers – whether these attacks are legal and whether the smartest tactics are used. 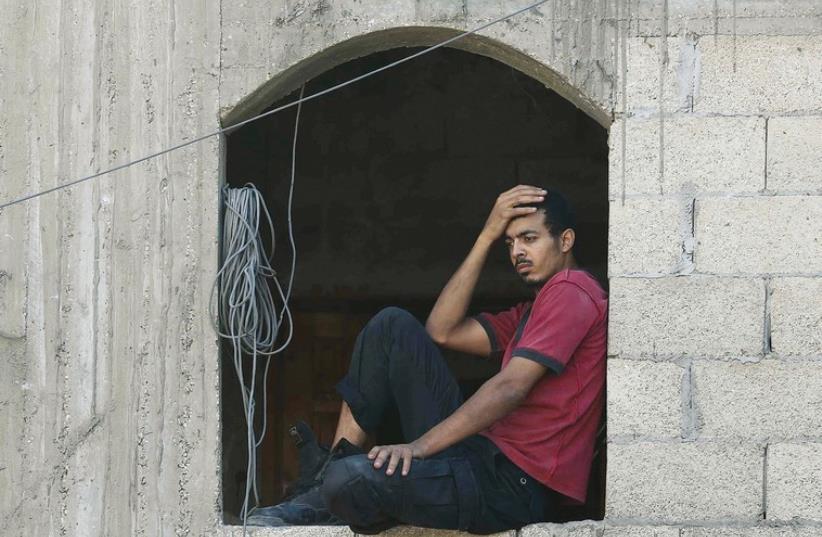 A palestinian man reacts as he looks at a neighboring house which police said was destroyed in air strikes by the IDF in Khan Yunis in the southern Gaza Strip on Tuesday.
(photo credit: REUTERS)
Advertisement
The IDF has purposely and systematically targeted the homes of terrorists in Gaza during the conflict as another way to take them out, in some cases leading to significant and tragic civilian casualties.In one such attack on the Kaware’a residence, a three-story structure that included a senior Hamas military operative, estimates suggest that as many as eight civilians may have been killed, including children, with another 28 wounded.Numerous reports have mentioned an attack on the home of Hafez Hamad, an Islamic Jihad military operative, with estimates that as many as five civilians were killed.There are both legal and factual questions associated with these attacks.First, could such attacks theoretically be considered valid military targets? This question is regulated by Article 52 and the related articles of Protocol I of the Geneva Conventions.The article itself is quite complex, but it basically says that one cannot attack a target that is not military in nature.Although Israel is not a party to Protocol I, the IDF has said that it consistently makes sure that it complies with its general provisions, including Article 52.A house on a city street, in which all of the people in the house are “off” the battlefield would appear to be inherently nonmilitary and as off-limits as a structure could be.

How is it that houses have become targets? According to many analysts, houses can become valid military targets to the extent that initially nonmilitary locations make “an effective contribution to military action,” to the same extent that persons who would otherwise be defined as “civilians” become combatants when they are “directly participating in hostilities.”That does not mean that each attack was specifically justified, but critics claiming that the law of armed conflict categorically prohibits targeting houses, no matter who is present and what the house is being used for, are ignoring an interpretation of targeting supported by most militaries and a growing number of academics.The crucial question of proportionality is determined by the importance of striking a military operative and the difficulty of finding an alternative time and place to attack, given the expected number of civilian casualties.These questions are nearly impossible to judge without knowing the full intelligence picture as it exists in real time.But in 2009, the top judicial court in Spain, in one of the flagship lawfare cases against Israel, essentially approved Israel’s High Court and related investigative decisions that the killing of 15 civilians and wounding of 150 and the destruction or damaging of 38 houses to kill one man, Hamas commander Salah Shehade, had not been disproportionate under the circumstances.While many critics slam Israel’s legal and judicial apparatus for resisting criminalizing IDF conduct, the Spanish court said that the apparatus satisfied “the requirements issuing from the application of the right to effective due process by an independent and impartial judicial system.”This does not mean that each individual attack was proportional, but it does mean that critics cannot claim a failure of proportionality even with a clearly tragic number of casualties.

What of the specific circumstances? With the Kaware’a attack, the IDF reportedly gave two warnings to those in the structure to evacuate, whereas there were none in the Hamad attack.More details are expected to emerge about differences between the circumstances soon.The debate as to whether an obligation to warn exists in such circumstances and the exact nature of that obligation are even more disputed.A number of rules could apply to warnings in different circumstances, but recent manuals on air and missile warfare specifically emphasize a balance between an obligation to provide “effective” and “specific” warning and what is “permitted by circumstances.”In other words, in an ideal world, there would be no civilian casualties with effective and specific warnings and surveillance of the area that ensure attacks are not carried out until civilians are safely evacuated.But in circumstances where a warning will lead to the terrorist target escaping, the “circumstances” may not always “permit” a warning.

What about instances where Hamas is regularly using human shields? A few reports say that some of the Kaware’a civilians left the structure after a telephone call warning, but returned after the second warning – a “knock on the roof” (a missile fired at the rooftop without an explosive warhead).This could make an “effective” warning nearly impossible.Even so, that would not necessarily excuse Israel from weighing expected civilian deaths against the military advantage of killing a terrorist.Disparate reports have said that some of the civilians who died went to the roof as human shields after the second warning, but some implied they reentered the structure confused about whether the knock on the roof was the actual attack, even though it had not destroyed the structure.This leads into the controversial debate about roof-knocking: Is it a valid and useful warning to convince civilians to leave when telephone calls are unsuccessful? Or is it, as the Goldstone Report called it, “a form of attack against the civilians inhabiting the building?” While this issue, somewhat new, is likely unsettled, leading scholars such as US Naval War College Prof. Michael Schmitt, have endorsed the tactic and disputed Goldstone’s view on the issue.In the limited experience in which roof-knocking has been used in recent Gaza conflicts, a 2009 Foreign Ministry report related that on the one hand many civilians were saved using such warning shots, while on the other hand, the Nazar Ri’an family ignored a warning shot and were killed when the IDF saw that some civilians evacuated and assumed that all of them had.At this stage there are more questions than answers – whether these attacks were legal and whether the smartest tactics were used or not will likely continue to be debated for years to come.
Advertisement
Subscribe for our daily newsletter