By JPOST.COM STAFF, YAAKOV LAPPIN
IDF jet 311
(photo credit: IDF spokesperson)
Advertisement
American officials have told the New York Times that Jerusalem had given the US advance warning of an Israeli air strike at dawn on Tuesday on a convoy carrying weapons in Syria, close to the Lebanese border. American officials said overnight Wednesday that the strike had targeted a suspected shipment of anti-aircraft missiles, the Wall Street Journal and Times reported. Wednesday's strike on the the convoy, which has not been officially confirmed by Israel, came after hours of what Lebanese army sources described as repeated invasions of its airspace by Israeli warplanes. Syria’s military command on Wednesday night denied that a convoy had been attacked, saying that a military research facility had been the target. The White House and the Israel Defense Forces have declined to comment. 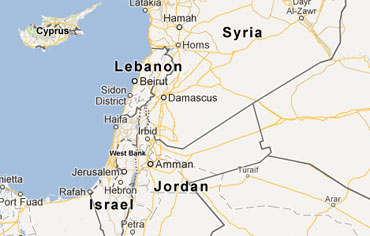 The Wall Street Journal report cites a Western official as saying that the strike targeted a convoy of trucks carrying Russian-made SA-17 anti-aircraft missile launchers to Hezbollah, in a border area west of Damascus. Hezbollah acquisition of such missiles could hinder Israel’s ability to maneuver freely over Lebanon for surveillance or target Hezbollah targets in any future conflict. Other foreign reports on the strike also said a weapons convoy carrying “game-changing” arms from Syria to Hezbollah in Lebanon had been hit. Reuters cited one Western diplomat as saying that the target was “a truck loaded with weapons, heading from Syria to Lebanon,” adding that the consignment seemed unlikely to have included chemical weapons.Other reports suggested that the weapons hit were Yakhont anti-ship missiles or powerful Scud D surface-to-surface missiles. There was no word on whether the convoy carried chemical weapons. Foreign reports are also conflicted over the location of the strike. Most say the air strike took place near the Syrian town of Zabadani, in the southwest of the country near the Lebanese border, while others said the attack occurred just after the convoy entered Lebanon, near the village of Nabi Sheeth.Syrian state television said that Israel Air Force fighter jets struck a “military research center” in the Damascus province, near the border with Lebanon, at dawn on Wednesday. Two people were reported killed and five wounded in the attack on the site in Jamraya, which the television described as one of several “scientific research centers aimed at raising the level of resistance and self-defense.” The building was destroyed, the Syrian military command said in a statement carried by state media. It said planes flying below radar crossed into Syria just north of Mount Hermon, and returned on the same route.Lebanese sources reported the entry of 12 Israel Air Force jets in waves on Tuesday afternoon and evening. The fighter planes flew over the southwestern Lebanese town of Nakoura, then headed northeast over Bint Jbail toward the Syrian border, according to the reports. At 2 a.m., the jets were reportedly heard heading back to Israel.A source among the rebels fighting the regime of Syrian President Bashar Assad said an air strike at around dawn blasted a convoy on a mountain track about 5 kilometers south of where the main Damascus-Beirut highway crosses the border. “It attacked trucks carrying sophisticated weapons from the regime to Hezbollah,” the source said, adding that it took place inside Syria, though the border in the area is poorly defined. Reuters contributed to this report.
Advertisement
Subscribe for our daily newsletter