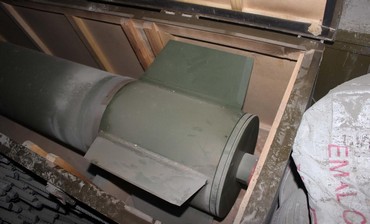 The Israel Navy unloaded some 150 containers from the Klos C on Sunday morning, a day after the ship docked at Eilat port."Just walked through a hangar with rows of these rockets from the Iranian weapons shipment. All I can say is I'm happy they're in our hands," IDF Spokesman for International Media Peter Lerner said on his Twitter account. According to Channel 10, weapons experts who arrived at the naval base in Eilat were trying to determine which type of rockets the ship contained - those with a 90 k.m. range or the more advanced model of the M-302 rocket with a range of 150-200 k.m.The IDF is expected to complete the unpacking and classification of the weapons on Sunday before presenting their findings at the naval base in Eilat on Monday.Prime Minister Binyamin Netanyahu and Defense Minister Moshe Ya'alon were expected to travel to Eilat on Monday for the unveiling of the weapons.Both Netanyahu and Ya'alon addressed the IDF's interception of the Iranian-sponsored weapons ship on Sunday. Speaking at the opening of the weekly cabinet meeting, Netanyahu said that Iran's blatant lies would be exposed when the contents of the ship were presented on Monday.Speaking at a memorial ceremony for fallen soldiers in Jerusalem, Ya'alon stated that "the interdiction of the ship reveals the danger and lack of restraint of the regime in Tehran. We face a complicated struggle against a cruel, sophisticated, shifty and versatile enemy."