By YAAKOV LAPPIN
The damage from an attempted arson at a mosque in West Bank
(photo credit: Courtesy Rabbis for Human Rights)
Advertisement

Far-right activists set fire to a mosque door in Deir Istya, southeast of Kalkilya, in the early hours of Wednesday in what police are deeming a pricetag attack. The door and rug of the building were damaged, and graffiti was sprayed on the mosque’s walls, police said.

No injuries were reported.The words “Arab’s out!” “Revenge for the blood of your servants spilled in Kusra,” and “Regards from Kusra,” were written on the walls.Kusra refers to a recent incident in which settlers suspected by Palestinians of setting out to attack their village of Kusra were beaten, before being rescued by village elders and the army.Israel Police spokesman Micky Rosenfeld said Wednesday that the vandalism is the third price-tag incident in Judea and Samaria in the last two weeks. 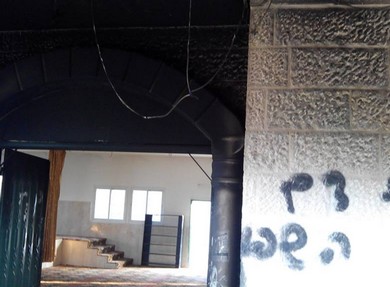 “Our units are working in coordination with the IDF and searching for the suspects,” he said. “A forensics team is at the scene taking evidence and we’re looking at this as a criminal incident with nationalistic motives.”

The IDF said it took a severe view of such crimes, which “distract the attention of security forces from their main mission, to combat terrorism, and undermine the relative security stability in the area.”Also on Wednesday morning, the IDF arrested four Palestinian security suspects across the West Bank.