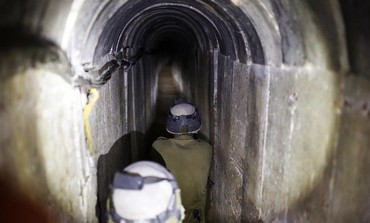 IDF soldier sits atop a tank just outside northern Gaza Photo: REUTERS/Amir CohenIDF soldiers who were carrying out work to destroy a a tunnel built by Hamas for terrorism on the Israel-Gaza border came under fire from a Palestinian terrorist cell overnight Friday. The IDF stated that terrorists detonated an explosive device targeting the soldiers during the operation. The attack left five soldiers injured. One is suffering from serious injuries, one was moderately wounded and three soldiers were lightly hurt, an army source said. The wounded were airlifted to the Soroka Medical Center in Beersheba. In response to the attack, the IDF fired a shell at terror suspects in the nearby Gazan district of Khan Younis. One Palestinian gunman was killed and a second was wounded, according to Palestinian medical sources.IAF aircraft also struck an attack tunnel in the southern Gaza Strip, the IDF stated. Three members of the Hamas Kassam Brigades were killed in the strike east of the town Qarara, according to Palestinian news agency Ma'an.
The IDF accused Hamas of breaking the terms of the ceasefire deal that ended Operation Pillar of Defense in December 2012.The soldiers were operating on both sides of the security fence in the Eshkol Regional Council, where the IDF uncovered a 1.7 kilometer long attack tunnel some two weeks ago. The tunnel began in Gaza and crossed the border into Israel, before branching into two tunnels. A Hamas source said that clashes broke out in the area after a number of Israeli tanks crossed the border fence into Gaza in an area close to where the tunnel was discovered.Hamas said the IDF tanks had entered the Gaza side of the border and had remained there for several hours and clashes erupted as militants fired mortar shells at the tanks.“This mission was imperative due to the potential to utilize the terror tunnel for future attacks against Israeli civilians," IDF spokesman Lt.-Col. Peter Lerner said. "This tunnel, similar to the one used to kill two IDF soldiers and kidnap Gilad Shalit in 2006, was built for this heinous purpose."Despite that, Israeli defense officials on Friday clarified Israel was not seeking an escalation in violence."Quiet will be answered with quiet. An attack will draw be a painful response," the head of Israel's southern command, Sami Turgeman said after visiting the injured soldiers at the hospital.On October 12, the IDF uncovered the massive Hamas attack tunnel leading from Khan Younis, in the southern Gaza Strip, into Israel, complete with an electrical supply and phone lines.The tunnel might have been intended for attacking or kidnapping soldiers, or for moving terrorists from Gaza into Israel to commit an atrocity against civilians in border towns and villages, army sources said at the time of the discovery.It took Hamas over a year to complete, and is tall enough inside to allow people to stand fully upright as they travel along it. The tunnel is buried some 20 meters underground as it crosses the Gaza border.A security source said it was the most well-designed terror tunnel found by the IDF to date.The tunnel was constructed using approximately 24,000 Israeli concrete slabs which the IDF had permitted into Gaza to ease the crisis in the civilian construction sector, Southern Command chief Maj.-Gen. Sami Turgeman said. As a result, Israel has stopped allowing concrete into Gaza.Reuters contributed to this report.
Advertisement
Subscribe for our daily newsletter