3 Palestinians killed in gun battles with security forces in Jenin

Hamas member Hamza Abu Aleija comes out of house firing, is shot dead by special forces; at least 2 rioters killed in exchange of fire with IDF. 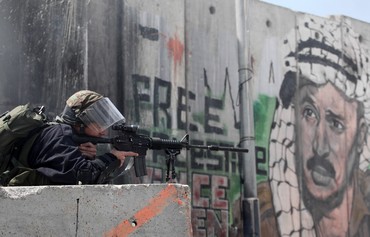 IDF forces in Kalandia (Marc Israel Sellem)Three Palestinians were shot dead in gun battles that erupted during a counterterrorism raid in Jenin early on Saturday.Security forces had entered the refugee camp in the West Bank city to arrest a security suspect, later named as Hamas member Hamza Abu Aleija.
(Helmet camera footage of operation, Credit: Israel Police)He planned to carry out a campaign of shooting attacks on Israeli civilians and military targets after receiving instructions to do so from Hamas in the Gaza Strip, according to the army.The IDF is on standby in the West Bank for the possibility of an increase in disturbances in the coming days.A joint force from the IDF, Shin Bet (Israel Security Agency) and the Border Police’s elite counterterrorism unit entered Jenin to make the arrest.Counterterrorism unit members encircled the home, as a force composed of infantry soldiers from the Nahal and Givati brigades, and border police, formed a perimeter to secure the operation.As counterterrorism unit members approached the house to make an arrest, shots were fired at them. The special forces stopped their approach, and the army used loudspeakers to call on all of the inhabitants to vacate the building.“Everyone left the home other than the suspect. We ensured there were no family members inside,” a senior military source said.Meanwhile, Abu Aleija continued firing bursts of gunfire from an M-16 at the security forces, and Palestinian gunmen from the area arrived, opening fire on the infantrymen who were securing the operation.The counterterrorism unit sent an attack dog into the home, but Abu Aleija shot and killed it.The wanted man then burst from home, shooting as he went. He shot two members of the counterterrorism unit, lightly wounding them.The unit returned fire, killing him on the spot.Meanwhile, soldiers securing the operation returned fire at the gunmen attacking them, killing two.“This operation was launched to thwart an imminent terrorist attack that was planned for the coming days,” the army source continued.Soldiers acted proportionality and professionally, while complying fully with the rules of engagement, he added.They had come under attack from armed terrorists who also threw explosives, firebombs, and rocks, the source stated.Three Palestinians were arrested during the clash. An additional Palestinian may have been killed, IDF sources said.Abu Aleija was “one of the most important terror suspects that we’ve been looking for,” a security source told The Jerusalem Post. “He’s escaped several past attempts to apprehend him.”He was the son of Jamal Abu Aleija, a head of Hamas’s military in the West Bank, who is serving a life sentence in an Israeli prison for a host of terrorism offenses.The security source said the armed attack on security forces in Jenin on Saturday was “very serious,” adding, “We haven’t seen many of these types of incidents. Shots were fired, and explosives were hurled at us.”The IDF spent a “long period” planning the raid, a second army source said, adding that Abu Aleija was about to launch a campaign of shooting attacks on a settlement and army positions in Judea and Samaria.Hamas in Gaza orchestrated the attack, and Hamas members released in the Gilad Schalit prisoner release deal played a role in the terrorist plot, according to intelligence gathered by security forces.“This became an immediate terrorist alert,” the source said.Following the firefight, tens of thousands of Palestinians took part in the funerals of the three Palestinians on Saturday.Participants called for revenge and also called on the Palestinian Authority to end peace talks with Israel and to reconcile with Hamas.Three Palestinian groups released a joint statement vowing to “respond harshly to the killing of the three young people.”The three groups were Izzadin Kassam (the military arm of Hamas), the Al-Quds Brigades (belonging to Islamic Jihad) and Fatah’s Al-Aksa Brigades.“The martyrs’ blood will not be in vain. We will be a curse on the Zionists,” the statement read.“The resistance is like embers hidden underneath the ashes and it will strike from places that the occupier did not think of,” the terrorist groups added.The PA did not escape criticism.In an official announcement Hamas said on Saturday that its security apparatus kept Hamza Abu Aleija under arrest for months in the refugee camp.Hours after the three Palestinians were killed in the Jenin gun battle early Saturday morning, some 150 Arabs rioted outside the Damascus Gate of Jerusalem’s Old City, resulting in six arrests.The riot began at about 5:30 p.m. when the group, angered over the deaths in Samaria, began throwing rocks at police. To disperse the crowd, police used non-lethal stun grenades.No one was wounded during the melee, police said.Yasser Okbi and Daniel K. Eisenbud contributed to this report.
Advertisement
Subscribe for our daily newsletter