By BEN HARTMAN
JANUARY 27, 2014 18:18
Palestinian throws stone at Beitunia Nakba Day protest 370 R
(photo credit: REUTERS/Darren Whiteside)
Advertisement
The past year saw a sharp rise in the number of terror attacks and fatalities in Judea and Samaria over 2012, according to a report issued by the Shin Bet General Security Service.In 2013, there were some 1,271 attacks in Judea and Samaria, as opposed to 578 in 2012, the Shin Bet (Israel Security Agency) said. Of these attacks, 1,042 took place in Judea.In addition, of the six Israelis killed in terror attacks in 2013, five were killed in the West Bank – as opposed to 2012, when all of the 10 Israeli fatalities from terror attacks took place inside the Green Line. Of those killed, three were civilians and three were members of the security forces. 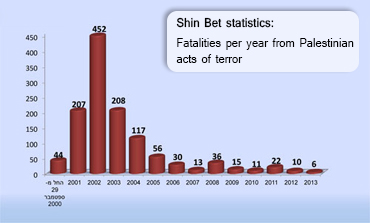 The 10 fatalities listed for 2012 include six Israelis killed during Operation Pillar of Defense in November 2012, the Shin Bet noted.No Israelis were killed in attacks launched from Sinai, the report said, adding that most of the attackers were considered “lone wolf types” and not members of organized terror cells.Of the six Israelis killed, three were stabbed to death by their attackers, two were killed by snipers and one, IDF soldier Tomer Hazan, was kidnapped and strangled. Five of the six killings took place from September until the end of the year.Altogether, some 44 Israelis were injured in terror attacks in 2013, according to the Shin Bet, as opposed to 309 in 2012, 269 of which were during Operation Pillar of Defense. The Shin Bet said that 78 percent of the injuries in 2013 were caused in rock-throwing or firebombing incidents. Of the 44 injured, 15 were civilians and 29 members of the security forces. 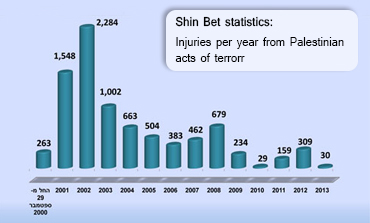 According to Shin Bet figures, since the outbreak of the second intifada on September 29, 2000, 1,227 Israelis have been killed in terror attacks and 8,549 injured.The biggest drop-off in 2013 was seen in attacks originating from the Gaza Strip, figures which include rocket attacks. In 2013, there were 55 attacks originating from Gaza, as opposed to 1,130 in 2012, according to the Shin Bet report. These figures include 63 rockets and 11 mortars fired into Israel in 2013, as opposed to 2,327 and 230 in 2012, respectively.In addition, the Shin Bet said it managed to prevent 190 suicide attacks in 2013, including 16 suicide attacks, as opposed to 112 in 2012.Terror attacks in the West Bank more than doubled in 2013, climbing from 578 in 2012 to 1271 in 2013.The Shin Bet arrested more than 2,500 terror suspects in 2013, most of them in the West Bank. There was a rise in attacks by extreme right-wing activists against Arabs in 2013, with 25 such attacks being recorded.The report also documented the thwarting of 40 terror attacks in the West Bank, being directed from Gaza, which involved Palestinian prisoners released in the Gilad Schalit deal.JPost.com staff contributed to this report.