Leader of protest, rabbi Auerbach has instructed students not to present themselves for IDF recruitment.


Video credit: Yisrael Cohen/Kikar HaShabbatA leading ultra-Orthodox rabbi and several hundred haredi men took part in a demonstration Wednesday outside the IDF’s Prison 6, near Atlit, south of Haifa.They were protesting the arrest and detention of a yeshiva student who refused to present himself to the IDF enlistment office.Moshe, a haredi man of 19 from Kiryat Malachi, was imprisoned for 14 days starting Sunday night. He had been arrested by the IDF military police and underwent trial before an IDF judge.Haredi demonstrators began arriving outside the prison throughout Wednesday morning and were joined later by Rabbi Shmuel Auerbach, 86, one of the most senior and hard-line haredi leaders in the country.Moshe’s arrest came against a background of mounting tensions surrounding government legislation aimed at drafting ultra-Orthodox men for either military duty or an alternative form of national service. Divisions have been opening up between members of the governing coalition as to how best to achieve a significant increase in numbers.Several Knesset members, along with experts on haredi society, have warned that using the threat of imprisonment would be counter-productive.However, proponents of service equality have said that such measures would be required in order to prevent any High Court challenge to the law.The haredi demonstrators at Prison 6 protested peacefully while chanting such slogans as “God separated us from the non-Jews and gave us the Torah of truth” and “In every generation they rose up to destroy us but God saved us from them.”According to the haredi newspaper Hapeles, which first reported the arrest, Moshe, who studies at a yeshiva in Petah Tikva, was initially called up for IDF service in 2012, when the Tal Law was still in effect. At that point a person studying fulltime in a yeshiva could postpone his service for a year – on an indefinite basis – until the age of military service exemption.He formally postponed his service before the law expired in August of that year, but subsequently failed to present himself at the enlistment office, as he was legally obligated to do, when called a second time at the end of 2012.He is a follower of Auerbach, who has taken an even harsher stance on the issue of military service than has the mainstream haredi leadership.Rabbi Aharon Leib Shteinman, leader of the mainstream non-hassidic haredi community, has instructed yeshiva deans to tell their students to present themselves at the recruiting office when called up, but to avoid signing any documents.Yeshiva students who have done this have received enlistment orders, but the Defense Ministry has repeatedly cancelled them as the enlistment date draws near.Auerbach has, however, instructed yeshiva deans and students who are close to him not to present themselves at the recruiting office at all.Someone failing to do so is deemed a draft evader and subject to arrest. 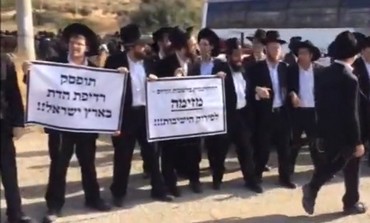 The demonstrators outside Prison 6 held up a sign saying “Presenting oneself [to the enlistment office] is a conspiracy to dismantle the holy yeshivot.”It would seem that there are other yeshiva students who have refused to present themselves to the recruiting offices, but how many is unclear.Auerbach heads what is known as the Jerusalem Faction, a small but significant grouping of non-hassidic haredim who are loyal to him and not to Shteinman.In October, for the first time ever, the group’s political party, Bnei Torah, contested municipal elections in Jerusalem, Bnei Brak and Modi’in Illit. In a political coup for the ultra-Orthodox world, it received five council seats at the expense of the traditional Degel Hatorah Party, guided by Shteinman.Hiddush, a religious-rights lobbying group that has strongly advocated for haredi enlistment, warned on Wednesday that the arrests and subsequent protests would become commonplace if the government insists on stipulating criminal sanctions for yeshiva students refusing to serve.“The protest today proves again that anyone who decides to imprison thousands of haredim ensures that they will wage an uncompromising war [against such a policy], and the few who do currently enlist will not be able to continue to serve in the army,” said Uri Regev, Hiddush’s executive director and a Reform rabbi.“If there is an attempt to use imprisonment it will play into the hands of the haredi extremists who are completely opposed to IDF service,” Regev said. “The way to bring about haredi enlistment is through comprehensive economic sanctions which will make staying in yeshiva financially impossible for the majority and will bring a halt to the public funding of draft evaders.
Advertisement
Subscribe for our daily newsletter