Analysis: Do the Turkish elections offer a modicum of hope in preserving its democracy?

The oft-repeated Erdogan quote bears repeating – “democracy is a train that you get off once you reach your destination.” 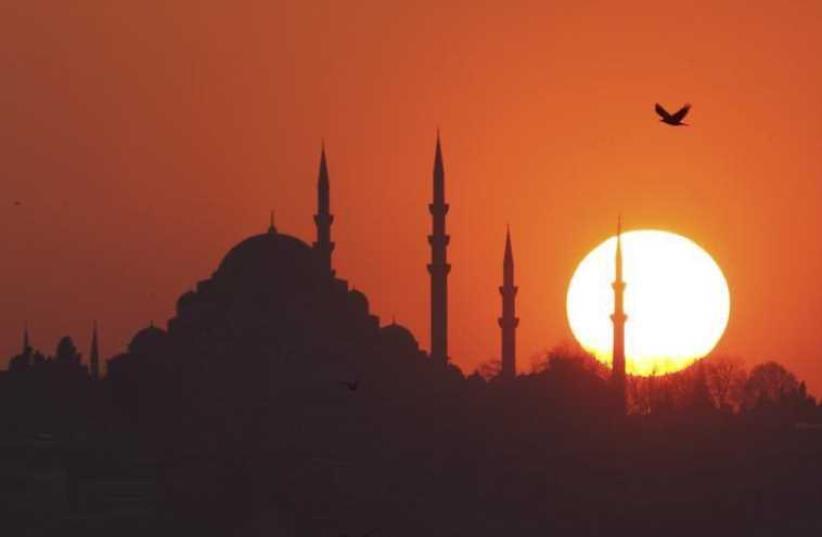 The sun sets over the Ottoman-era Suleymaniye mosque in Istanbul
(photo credit: REUTERS)
Advertisement
Regardless of the results of the parliamentary election on Sunday, Turkish President Recep Tayyip Erdogan is probably going to push ahead in consolidating power for himself and his party and continue to Islamize the state.The question is how fast he will be able to move. If the election results force his AK Party to form a coalition government, it could slow the pace a bit, but many of the state institutions have already been brought under his authority.The oft-repeated Erdogan quote bears repeating – “democracy is a train that you get off once you reach your destination.”Rachel Sharon-Krespin, director of the Turkish Media Project at MEMRI (the Middle East Media Research Institute) told The Jerusalem Post on Sunday evening that the preliminary results so far, showing that Erdogan’s AKP might be forced to form a coalition government, could provide some hope for Turkish democracy.“It would be an irony if the Kurds would save Turkish democracy,” she said, referring to the pro-Kurdish Peoples’ Democratic Party (HDP), which was projected at press time to make the 10 percent threshold and get into parliament.Sharon-Krespin wrote in a that these elections are crucial as they will determine if Erdogan can become an absolute ruler or whether “his era has come to an end.”However, she said that in Turkey it is “highly expected that these elections would be rigged,” adding that a Twitter account, known as a whistle- blower and established to reveal truthful leaks, said a team has been set up by the AKP to rig the elections and have a presence at every ballot box.Asked what would happen if the final results will suggest tampering and rule out other parties making it into parliament, Sharon-Krespin replied that there would “definitely be protests,” particularly in the eastern and southeastern parts of the country.However, if the Kurdish party is able to make it in, it could be good for minority rights, and that means it would be positive for Turkish Jews.Michael Rubin, a scholar at the American Enterprise Institute and a former Pentagon official, told the Post, “Let’s be clear, Erdogan got off the train of democracy several years ago.“The AKP has always been over represented in parliament, sometimes getting twice as many seats as they would have if other parties passed the 10% threshold,” he said.If the Kurdish HDP and the previous main opposition Republican People’s Party (CHP) pass the 10% threshold, then the AKP supermajority is over, added Rubin.“But Erdogan has tasted dictatorship and he likes it.He does not care much for elections unless people vote for him,” continued Rubin, adding that just as “we saw in local elections in places like Ankara, he won’t hesitate to fudge the numbers when the votes are counted off site to ensure the right results.“Most Turkish politicians tell me he gets at least a 5% bonus from fraud.”Not only can he manipulate the results, said Rubin, but “Turkey’s democracy may be too far gone” since “Erdogan has staffed the bureaucracy with his cronies so elections may not change much.”“Erdogan looks in the mirror and sees a sultan,” he asserted, going on to say that this may be the last chance for voters “to let him and the world know that the emperor has no clothes.”Daniel Pipes, scholar and president of the Middle East Forum think tank, told the Post that the significance of the elections are being overrated.“Now, it hardly matters how the elections come out, just as it hardly does in Iran,” he said.“Erdogan signaled long ago that he sees democracy as a means to an end. He rode the democracy bus until it brought him to near-dictatorship,” argued Pipes.Asked about Erdogan’s possible foreign policy after the election, he replied that “Erdogan is a brilliant political operator within the Turkish domestic context but far less capable abroad. His confidence leads him to take risks and alienate other governments.”“I expect something in this arena will bring him down,” he predicted.According to an article by Pipes published in the Washington Times, he sees a possible foreign policy fiasco developing, perhaps with Russia in Ukraine, Israel in Gaza, the civil war in Syria or the gas fields of Cyprus.“And when that moment arrives, hardly a soul will bring up the results of the June 7 election; and none will remember it as a turning point,” he concluded. •