The first Jewish Drag Race superstar has been crowned

In RuPaul's words, Sasha Velour exhibited enough charisma, uniqueness, nerve, and talent to slay the rest of the competition. 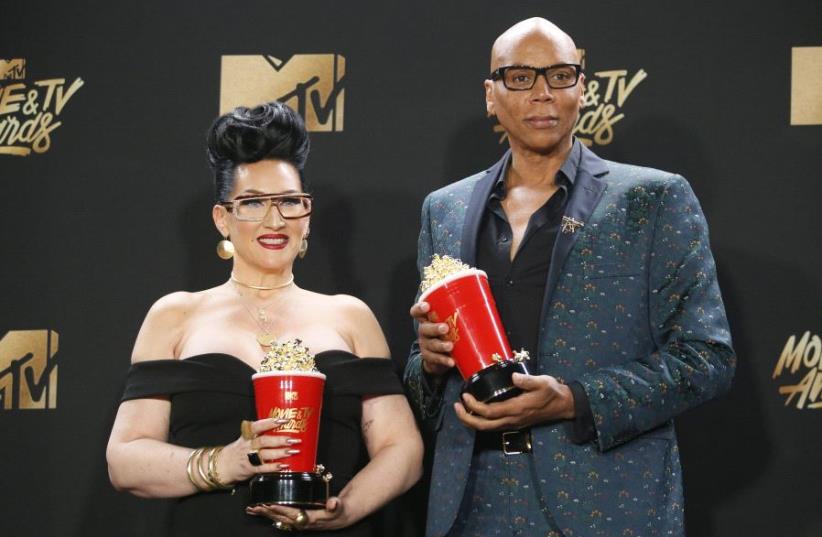 Michelle Visage and RuPaul at the MTV Movie and Television Awards - Best Reality Competition for RuPaul's Drag Race'
(photo credit: REUTERS/DANNY MOLOSHOK)
Advertisement
The ninth season of RuPaul's Drag Race was dramatic, glamorous, and very Jewish.Sasha Velour became Drag Race's first Jewish winner on Friday, taking the kosher crown during the season 9 grand finale which aired on VH1.Velour used her unique artistic talent, entertaining wit, and unmatched intelligence to take the top spot and become 'America's next drag superstar.' Sporting an exquisitely-crafted jester costume and her signature bald head, she told the crowd in Los Angeles that she represented the future of drag.


Sasha's father (aka Papa Velour) and partner both attended the finale, excitedly cheering on their pick for the crown. Sasha's mother passed away from cancer before he competed; during the show, he said that his signature bald look was in honor of his mother's battle.Fourteen queens competed in this season's Drag Race, which featured a different challenge every week. At the end of each challenge, the two bottom contestants battle each other in a lip syncing competition. Velour won two challenges during the season and was never on the bottom, so she never had to 'lip sync for her life.'


However Velour got to showcase her lip sync skills twice during the grand finale, battling the other top four contestants. Spreading flower petals all over the stage and sporting an alien-like headpiece with a stunning white dress, Sasha took on two different Whitney Houston songs throughout the night and slayed her competition.Sasha, aka Alexander Steinberg, was born in Illinois to a Jewish father and Protestant mother, who let him decide as a child which faith to follow. In a 2015 interview in The Forward, Steinberg said, "I chose Judaism, mainly because of the stories and the food. And I felt a strong connection with that side of the family, since I have a Russian name. Their history felt vibrant and personal."


That Russian name eventually took him to Moscow, where Steinberg lived while studying the role of art in Russian society for a Fulbright research project.He also feels a strong connection between Judaism and the world of drag performance. “The connection between the malleable identities of Judaism and of drag is really interesting to me," he told The Forward. “In terms of my own family, Diaspora has always been about repeated and dramatic reinvention."Steinberg was also drawn to the Talmud and Jewish philosophy because of its seemingly endless interpretation and used that as inspiration for Vym, a drag magazine that he launched in July 2015.


Sasha wasn't the only Jewish contestant this season. Alexis Michelle, the Broadway drag queen from New York, nonstop rocked a Star of David necklace and threw down some Yiddish phrases during the competition. She ended up in fifth place.RuPaul also has an affinity for all things Jewish. Like Alexis Michelle, the superstar has worn a Star of David necklace in various episodes and quotes the Talmud on his Twitter profile. And for even more Jewish connections, Drag Race judge and RuPaul's BFF Michelle Visage was adopted and raised by a Jewish family.Jinkx Monsoon, aka Jerick Hoffer, who won Drag Race season 5, plays a Jewish character, but the performer is Catholic with Russian-Jewish ancestry.