An additional 17 families are set to be relocated later in the week; state asks High Court for extension to remove buildings.

By TOVAH LAZAROFF
JUNE 27, 2012 01:31
Crane evacuates property at Ulpana 370
(photo credit: Tovah Lazaroff)
Advertisement
At 3 a.m. Tuesday, after she had packed up her home, Racheli Zadok painted her anger and pain with graffiti messages on the walls and the bathroom mirror in her small apartment in the Ulpana outpost.The young, soft-spoken mother wrote in bright orange letters on the mirror, “Look me in the eyes, and tell me it is I, I who am the criminal.”On her white living room walls, she wrote another ironic orange message.“Danger! There are Zionists here.”Then she slept briefly, and woke at 6 a.m. to the certain knowledge that this was her last morning in the home she had lived in with her husband, Yair, and young daughter, Shani, for the last three-and- a-half years.In the misty early morning, as the birds chirped and the night chill was still in the air, male residents of Ulpana, located on the outskirts of the Beit El settlement, came outside to the parking lot.They sat on plastic chairs or stood. In front of them they saw the outpost’s stone apartment buildings and in the distance, lay the Palestinian city of Ramallah.A white cardboard sign hung on the gate by the Ulpana buildings. It said, “I built a home in the Land of Israel.”The men wrapped themselves in prayers shawls and tefillin, recited the daily morning prayers and begged God for a miracle that would halt their forced departure from their homes.“Have mercy on us,” they prayed.Even as they finished, however, some 100 Defense Ministry workers wearing neon yellow vests that said “staff” began to fill the parking lot to help 15 out of 33 families who must relocate this week to modular homes in the Beit El settlement. The remaining 18 families will move on Thursday.On one exterior apartment wall, hung a sign, “Jews do not evict Jews.”Immediately upon arrival, ministry staff entered the apartment buildings, including that of the Zadok family, to pack and bring out boxes.Racheli stood in the kitchen talking briefly to reporters.A scarf covered most of her brown hair. Like all outpost residents she wore a black T-shirt that said in white block letters: “Ulpana neighborhood. We will return.” 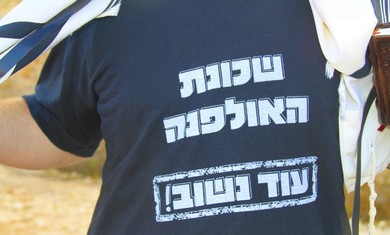 “It is hard,” she said, in a tearful voice. “It is very, very hard.”As she watched ministry staff members wrap protective plastic around her furniture, she noted that Friday was her fourth wedding anniversary.“I didn’t believe we would have to move,” she said.She and her neighbors had mounted a stiff lobbying campaign to politically thwart a High Court of Justice mandate to relocate five of 14 apartment buildings in the outpost.All 14 outpost buildings – each housing about six families – were built without authorization on land classified by the state as private Palestinian property. But only five were the subject of a 2008 petition by Yesh Din on behalf on the Palestinian landowners.As a result, the rest of the outpost buildings can remain, but all Ulpana residents, along with those in the Beit El settlement, have worked together to obstruct the evacuation.Last week, Ulpana residents decided not to physically resist the mandate, in exchange for extracting a number of promises from Prime Minister Binyamin Netanyahu including the construction of 300 new homes in Beit El. He also promised that in the future the state would not write legal responses to the court that supported the demolition of West Bank Jewish homes.“But just because we are leaving quietly, doesn’t mean we agree that we should leave,” Zadok said.Later, at a small press conference with reporters, Ulpana resident Reut Lerrer said their departure has not been voluntary.“They are forcing us to leave our homes and our neighbors. We agreed to do it this way because we are people who seek peace. We are doing this [leaving] with a broken heart but with our heads held high. No one will break our will and we will continue to develop the land,” she said.Ulpana residents have argued that the court decision was a miscarriage of justice because the issue of property rights was never adjudicated. They have further noted that the outpost was built with NIS 4.5 million from the Construction and Housing Ministry and that its residents used state grants and bank mortgages to purchase their homes.Most Ulpana residents only became aware in the last year that the status of their homes was problematic. They have been shocked to discover that as a result of their choice to act out their Zionist beliefs, they have been painted as lawbreakers.Baruch Kitay recalled for reporters how he had learned as a child to love Israel in his Jewish school in Australia.“I learned to love, respect and live according to the [Israeli] flag,” he said. The one that had hung in his apartment had already been packed away.He has been asking himself lately if there was something wrong with the Zionist dream he grew up with – of Jews returning and developing their homeland.“Is Zionism not returning to the land and building? I want to suggest that maybe the prime minister is wrong and maybe what he decided [the evacuation] is not Zionism,” Kitay said.The state plans to physically relocate the five apartment buildings in a complex technical process that will take a year.On Tuesday, it asked the High Court of Justice to allow it three months to move the buildings off the property. The state hopes that the court will accept the evacuation of the building as compliance with the July 1 mandate.The buildings are to remain empty once the families leave.On Tuesday evening right-wing activists broke into an apartment that had been unlocked.They were ejected and the apartment was locked. 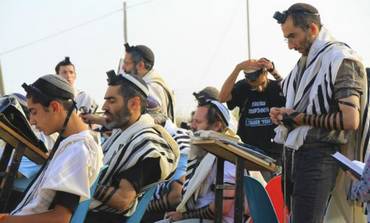