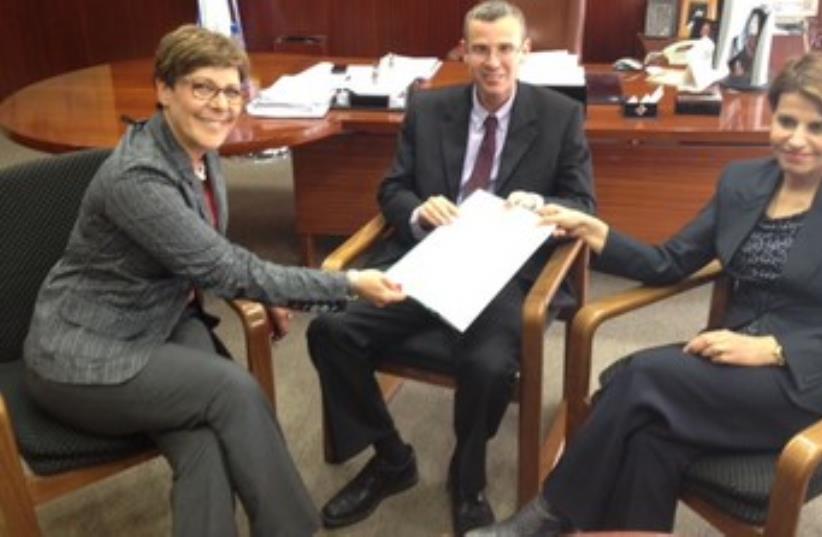 Levin, Itzik give nomination letter to Knesset secretary 370
(photo credit: Yariv Levin spokeswoman)
Advertisement
Kadima faction chairwoman Dalia Itzik (Kadima) and Knesset House Committee chairman Yariv Levin (Likud) officially nominated Judge Joseph Shapira as the next State Comptroller on Wednesday.The nomination, which Itzik and Levin submitted to Knesset Secretary Meller, has the support of 70 MKs from most of the Knesset's factions, including the largest ones – Kadima, Likud and Yisrael Beytenu.Comptroller Micha Lindenstrauss' term officially ends on July 3 after a seven-year term, and Shapira has been the leading candidate to replace him for months. Thursday is the final day to submit nominations, and the Knesset will vote on the new comptroller on Monday, May 14, even if it is dissolved ahead of elections.Shapira, 66, has been a Jerusalem District Court judge for seven years and is an IDF colonel (res.)."We are convinced that Shapira is a worthy person that will do the job of comptroller faithfully, honestly and without bias," Levin said.According to Levin, the comptroller must be elected by a wide consensus, and a large percentage of MKs will back Shapira.Itzik said the State Comptroller is an important job in a democratic country, and is proud to have found a candidate that crosses party lines.