'Al-Hayat' reports that Abbas will demand confidence-building measures from Israel as a condition to extending peace talks. 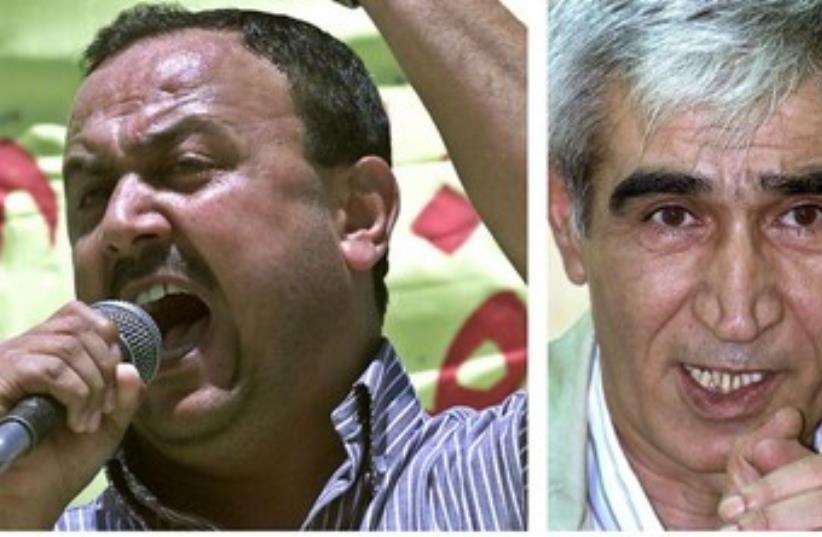 Jailed Tanzim leader Marwan Barghouti (L) and PFLP chief Ahmed Sa'adat
(photo credit: REUTERS)
Advertisement
In Monday’s scheduled meeting with US President Barack Obama in Washington, Palestinian Authority President Mahmoud Abbas will reportedly demand that Israel halt all construction in West Bank settlements as well as release high-profile Palestinian leaders who were convicted of terrorist atrocities, among them Tanzim chief Marwan Barghouti and Ahmed Sa’adat, the leader of the Popular Front for the Liberation of Palestine, all as a condition for Ramallah’s agreement to continue peace talks with Jerusalem.According to the London-based pan-Arab daily newspaper Al-Hayat, Abbas wants to present his people with a significant political achievement, hence he will spell out his terms to Obama as a way to “break the ice” between the two leaders. Peace negotiations between Israel and the PA are due to run their originally scheduled nine-month course by the end of April, with Washington seeking both sides’ signatures on a framework agreement that would allow the talks to continue. According to Al-Hayat, if Abbas’ terms are accepted by the Israeli government, the Palestinians would acquiesce to extend the talks to the end of this calendar year. Observers believe that Abbas will reject Kerry’s framework proposals, though he will be flexible regarding other American proposals that would permit the negotiations to continue beyond the nine-month deadline, according to Al-Hayat. Specifically, the Palestinian leader is seeking additional confidence-building measures by the government of Prime Minister Binyamin Netanyahu.Thus far, the Palestinians have refused Kerry’s proposal for recognition of Israel as a Jewish state. Ramallah has also balked at an Israeli military presence within a future Palestinian state on the West Bank.A senior Palestinian official told Al-Hayat that Ramallah believes the Americans and Israelis have coordinated positions on the framework proposals, and that Netanyahu’s public opposition to the parameters is “a maneuver that will enable American pressure on the Palestinian side.”Abbas aides reportedly said that the Palestinian leader anticipates pressure from Obama to agree to the US proposals, but Ramallah will insist on a freeze in settlement construction and the release of elderly, ill, and female prisoners as well as those held in administrative detention.Palestinian observers believe that Abbas is hoping to secure Barghouti’s release so that he could groom him to be his successor as head of Fatah. Given that the Palestinian leader has yet to anoint a replacement, it is assumed that tapping Barghouti would be a popular move on the Palestinian street.Barghouti is serving five life terms in prison for his role in attacks that killed and wounded several Israelis during the second intifada. Sa'adat has been jailed since 2008 for planning the murder of former tourism minister Rehavam Ze'evi.