By JPOST.COM STAFF
APRIL 16, 2014 17:46
Hilik Bar and Mahmoud Abbas, April 16, 2014
(photo credit: REUTERS)
Advertisement
Video: Tovah Lazaroff
A group of Israeli opposition lawmakers met with Palestinian Authority President Mahmoud Abbas in Ramallah to discuss the crisis in the peace negotiations Wednesday, amid heightened tensions over the shooting death of and Israeli man near Hebron on Passover eve.Nitzan Horowitz (Meretz), who was part of the delegation, told The Jerusalem Post that Abbas denounced all terror including the killing of Baruch Mizrachi in Monday evening's terror attack. "Abu Mazen [Abbas] said this specifically, he emphasized his disgust from bloodshed and terrorism. He said he's willing to participate in the investigation of the attack and to bring those accountable to justice," Horowitz said. Horowitz expressed optimism on Wednesday that Abbas was a genuine partner in the peace talks. He also said that only a Center-Left oriented government could bring about the end to the conflict with the Palestinians.  "Today there is a majority in the Knesset and the public to reach an agreement. (Prime Minister Binyamin) Netanyahu's manipulations harm the trust between the parties, between Israel and the US, and also endanger the stability in the region," he added.  Netanyahu slammed the Palestinian Authority on Tuesday evening for incitement that he claimed resulted in the Monday killing of Mizrachi. The Prime Minister also slammed the Palestinian Authority Tuesday for not officially condemning the killing.  A meeting between Israeli and Palestinian peace negotiators scheduled for Wednesday was postponed and it was not clear if the reason for the postponement was the fatal terror attack.  The Palestinian Authority stated that the meeting was postponed until Thursday at the request of the United States.Earlier in the day, Deputy Defense Minister Danny Danon told Israel Radio that Netanyahu should order Israeli negotiators not to meet with their Palestinian counterparts – as they were scheduled to do in the evening – until the Palestinian Authority officially issued a condemnation of the killing. 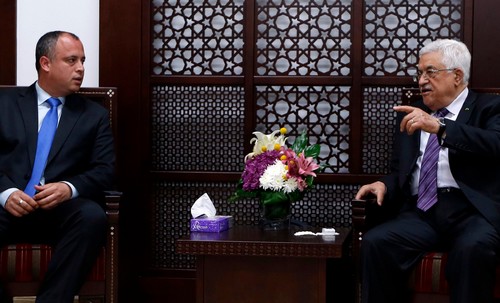 In addition to what Horowitz said Abbas told the Israeli delegation, a Palestinian official also reported Wednesday that Abbas had condemned the violence. At the meeting with the Israeli lawmakers, Abbas "condemned violence and the killing of Palestinians and Israelis", said Mohammed Al-Madani, a member of the Central Committee of Abbas's Fatah party. Nabil Abu Rdainah, a spokesman for Abbas, told a news conference in Ramallah: "We are against violence and against a return to violence." Endowments Minister Mahmoud Al Habash told Israeli reporters in Ramallah earlier that he was “pained” by the murder of 47-year-old Mizrachi.“We condemn the killing of all people irrespective of their background,” Al Habash was quoted as saying by Army Radio. “The idea of killing and violence is completely illegitimate.”   Other members of the Israeli delegation in Ramallah included Tamar Zandberg (Meretz), Hilik Bar (Labor), and Nachman Shai (Labor).