Yala online peace conference screenshot 311
(photo credit: Screen Shot)
Advertisement
Move over Camp David, Israeli-Palestinian peace has gone virtual.Facebook on Monday played host to the first-ever online peace conference, put together by a group called YaLa Young Leaders, aimed at creating dialogue between Israelis, Palestinians and Americans.“I am delighted to send greetings to all of you who have gathered in this virtual space to help shape the future of the Middle East,” US Secretary of State Hillary Clinton said in a pre-recorded video statement, projected on a YouTube billboard in a virtual park.Noting the role of technology in fomenting the revolutions of the Arab Spring, Clinton commended the Israeli and Arab conference participants for using the Internet to promote peace through dialogue.“You come to the table with the hope that you can look past your differences and lay the foundation for peace, and I admire your resolve to engage in these very difficult discussions,” Clinton said.“Your voices will continue to be invaluable in the process.”The conference included taped messages from a wide range of personalities, including President Shimon Peres, Palestinian Authority President Mahmoud Abbas, former US White House peace envoy Dennis Ross, UNESCO head Irina Bokova, American actress Sharon Stone and Barcelona football coach Joseph “Pep” Guardiola.“Peace,” said Peres, “is not necessarily a monopoly of governments. It can be and should be peace among people. So let the governments negotiate, let the administrations build, but you make the people come together: straight, directly, openly.”In a written message to the conference, Abbas said, “Watching the force of reason, dignity and courage takes us through leaps of hope into a brighter future.” 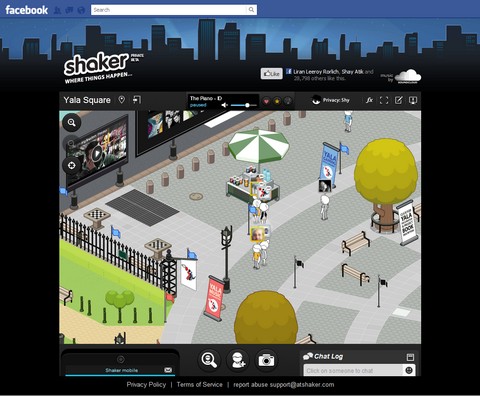 The Yala online peace conference.
Ross, who acknowledged that “obviously we are in a difficult time now,” made clear he didn’t believe the popular movements in the Arab world – movements that led to the victory by the Islamists in the Egyptian parliament – do not necessarily make peace more difficult to achieve now.Ross said that while it is critical for leaders to make peace, it is fundamental for the people on both sides to believe in that peace. And, he added, “I believe that ultimately if peace is between people, then having states become much more representative is ultimately a good thing.”The conference, also sponsored by the Shimon Peres Center for Peace, took place through a Facebook software platform called Shaker, which creates a virtual space for users’ online avatars to walk around, interact and view conference material together.This virtual reality, however, was ultimately not divorced from the hateful reality on the ground, as a number of people took to the organizers’ Facebook page to write anti-Semitic and anti-Israel comments.For example, someone named Samer Hussam posted the following: “To all the Palestinians in this group, you are helping to give the Zionists more time to create a new reality on the ground. Go back to national resistance. People, do not cover up the crimes of the Zionists. Do not sell the rights of your people for trips outside the country.” Another post read, “Go to hell Israel, the big nation of terrorists. Viva Free Palestine.”Cnaan Liphshiz contributed to this report.
Advertisement
Subscribe for our daily newsletter