By AVI ISACHAROFF
MAY 24, 2013 13:38
Olmert, Bush, Abbas370
(photo credit: Reuters)
Advertisement
Shortly after the dramatic meeting between Palestinian Authority President Mahmoud Abbas and then-prime minister Ehud Olmert at the latter's Jerusalem residence on Tuesday September 16, 2008, the Palestinian entourage returned to Ramallah. Despite the relatively late hour, Abbas’s advisors and the heads of Fatah arrived at his office; they understood the importance of the moment. Less than an hour earlier, Olmert presented the details of his offer for a peace deal between the nations, an unprecedented Israeli offer to be tendered to a Palestinian leader. Olmert essentially agreed to forgo sovereignty of the Temple Mount in Jerusalem, Judaism’s holiest site, and proposed that in the framework of a peace agreement, the area containing the religious sites in Jerusalem would be managed by a special committee consisting of representatives from five nations: Saudia Arabia, Jordan, Palestine, the United States and Israel. The advisors and Fatah officials heard from Abbas that Olmert laid out for him not only the details of the agreement but also a large map upon which he outlined the borders of the future Palestinian state. Abbas silenced those present at the late hour meeting so that he could concentrate. He asked for the map that Olmert described to be drawn from what he remembered because Olmert refused to give him a copy. The Israeli prime minister told him that he would not give Abbas the map until the Palestinian leader was willing to ink his initials on it, or in other words, agree to the borders that Israel offered. The Palestinian leader took a piece of the Presidential Office stationery and sketched the borders of the Palestinian state from memory. 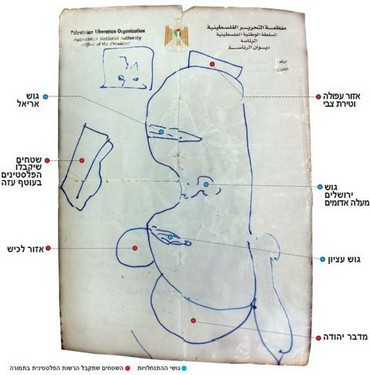 Abbas marked the settlement blocs that Israel was asking to keep: the Ariel bloc, the Jerusalem-Ma'aleh Adumin bloc (including E1) and Gush Etzion, all together consisting of 6.3% of the West Bank. On the other hand, the Palestinian president also sketched the areas that Israel offered in exchange for the settlement blocs: around Afula-Tirat Tzvi, the Lachish region, an area near Har Adar, and areas in the Judean desert and the Gaza envelope. These areas consist of 5.8% of Israeli territory. Abbas wrote on the left hand side of the sketched map, what turned out to be the incorrect figures that he remembered, 5.5% and 6.8% representing the amount of land to be swapped. On the other side of the piece of paper he wrote the other details of the offer: a secure corridor between the Gaza Strip and the West Bank by way of a tunnel, the five nation committee to oversee the holy sites of Jerusalem, Israeli evacuation from the Jordan valley and the absorption of around 5,000 Palestinian refugees into Israel, 1000 every year for five years. Sof Hashavua magazine, published by The Jerusalem Post Group, obtained a copy of Abbas's sketch during an investigation into the secret negotiations between Olmert and Abbas and published it for the first time on Friday. The two leaders met thirty six times mainly in Jerusalem and once in Jericho and reached a draft agreement that would clearly constitute the basis for any future peace deal between the parties. But in the end no peace deal was signed between Israel and the Palestinians despite Olmert’s far-reaching offer. Until today, the Palestinian Authority has not responded either positively or negatively to Olmert’s offer. Saeb Erekat, head of the Fatah negotiating team, was present at the meeting in Abbas’s office that night and he was also present at the end of the Jerusalem meeting between Olmert and Abbas. He was joined by Olmert’s diplomatic advisor Shalom Turgeman. Olmert and Abbas asked Erekat and Turgeman to meet the next day with map experts in order to reach a final version of the border between Palestine and Israel. But the next day, the Israeli side claims, Erekat phoned Turgeman and asked to postpone their meeting by 24 hours. A few hours after this call Erekat called back and said that Abbas had to go to Amman. Erekat explained that Abbas would update the Jordanians and the Egyptians about Olmert’s offer in order to receive their support and the parties would meet again the following week. “From that time, I am still waiting for Abbas’s telephone call” Ehud Olmert told Sof Hashavua. When asked why Abbas did not return to the negotiating table with him, Olmert says that the Palestinians took into account that former US president George W. Bush was at the end of his term and they were hoping for a more favorable leader in Washington and they also believed that Olmert himself was finished politically. But Olmert also lays the blame for the breakdown in negotiations at the feet of then foreign minister Tzipi Livni and then defense minister Ehud Barak. Olmert cites former US Secretary of State Condoleeza Rice’s book No Higher Honor in which she says that Livni came to her and Abbas separately asking them that they not “enshrine” Olmert’s peace proposal. Olmert also said to Sof Hashavua that Barak sent representatives to Abbas to tell the Palestinian leader not to accept his proposal. A senior Palestinian official told Sof Hashavua that Abbas thought Olmert’s proposals for Jerusalem and the right of return were unacceptable. “There were internal Palestinian talks about the offer”, the official said, adding “These are weighty issues. The natural thing for Abbas to do would be not to sign immediately and to act responsibly and return to consult with the Fatah leadership.” “Over the last few years Abbas has said he was willing to renew the talks from the point at which they ended with Olmert,” the official added. Erekat confirmed the details of Olmert’s proposal but said that Olmert’s memory with regard to the meeting with Abbas was “short.” “We also presented a map to Olmert that would transfer 1.9% of West Bank territory to Israeli sovereignty. On December 18, 2008 we deposited our map and Olmert’s map as we remembered it with President Bush at the White House in the presence of Rice and [National Security Advisor Stephen] Hadley. Bush asked that we and Israel send representatives on January 3, 2009 to Washington, but then the operation [Cast Lead] began in Gaza.” When Erekat was asked about the three months between the meeting with Olmert in September and the Gaza operation in January, he said that there were many intervening meetings between the Palestinians and Turgeman, Livni, and Tal Becker from the Israeli side. In response to Olmert's comments, Barak’s office told Sof Hashavua that the claims against Barak in the article are baseless and seemingly reflect the claimant’s pathetic state. Justice Minister Tzipi Livni’s office also denied Olmert's statements. The original full version of this article appeared in Hebrew in Sof Hashavua magazine, published by The Jerusalem Post Group.

Translated by Nathan Wise.
Advertisement
Subscribe for our daily newsletter