By JPOST.COM STAFF
turkish PM Erdogan 370
(photo credit: REUTERS/Stringer)
Advertisement
Turkish Prime Minister Recep Tayyip Erdogan turned down previous attempts at reconciliation by Israel due to a failure by the Israeli government to meet his pre-conditions, Turkish news outlet Hurriyet reported Tuesday.Erdogan told Hurriyet that one condition was the use of the word "apology." He said. "They wanted to express sorrow, but we said no. We wanted the word apology,” Hurriyet quoted him as saying.Israeli officials reportedly agreed to financially compensate Mavi Marmara victims’ families in light of the 2010 flotilla incident, but Erdogan insisted that a reconciliation would also require an apology and an end to the Gaza embargo, according to Hurriyet.Erdogan also told Hurriyet that Prime Minister Binyamin Netanyahu promised to start work on easing the embargo on Gaza.“We will monitor the situation to see if the promises are kept or not,”  Hurriyet quoted him as saying.Meanwhile, Erdogan said on Tuesday that he is planning to visit Gaza and the West Bank to see if Israel is holding up its end of the deal to lift the Gaza blockade, one of the conditions set by Ankara to normalize ties with Jerusalem, Turkish paper Today's Zaman reported.Erdogan, who announced over the weekend plans to visit the Strip next month, told ministers in a parliamentary meeting on Tuesday that he will travel to the Palestinian territories with Turkish relief organizations in order to work to improve the current humanitarian condition.On Friday, Prime Minister Binyamin Netanyahu spoke with Erdogan for the first time since coming into power in 2009, and voiced regret for the loss of life in the Mavi Marmara incident, apologizing for any operational mistakes that led to the death of nine Turkish activists. Breaking a three-year deadlock, the two agreed to normalize relations. However, National Security Council head Yaakov Amidror said on Sunday that Netanyahu’s apology did not obligate Israel to end the blockade of Gaza, and it could clamp down harder on the Palestinian enclave if it needed to because of security considerations.Following the conversation, Erdogan said Israel had met his demands to apologize for killing nine Turks aboard the ship, pay compensation to those bereaved or hurt and lift the blockade by allowing in more consumer goods.That fell well short, however, of an end to the blockade – which Erdogan had routinely insisted on during the almost three-year-old rift as a condition for rapprochement.Erdogan, meanwhile, told a crowd of supporters on Sunday that normalization of ties would only take place if Israel implemented the conditions of the deal discussed in the conversation with Netanyahu. The only firm condition mentioned in the statement following that conversation was payment of compensation.“If there is quiet, the processes easing the lives of Gazan residents will continue. And if there is Katyusha fire, then these moves will be slowed and even stopped and, if necessary, even reversed,” Amidror said on Army Radio.“We did not agree to promise that under any condition we would continue to transfer all the things into Gaza and ease up on the residents of Gaza if there is shooting from there,” Amidror added. “We do not intend to give up on our right to respond to what happens in Gaza because of the agreement with the Turks.”Meanwhile, on Monday signs were put up in Ankara to thank Erdogan for getting Netanyahu to apologize for the Gaza flotilla incident. The billboards in Turkish read: "Israel apologized to Turkey. Dear Prime Minister, We are grateful that you let our country experience this pride." 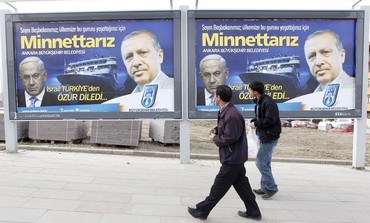