By YONAH JEREMY BOB, JPOST.COM STAFF
Justice Minister Tzipi Livni 370
(photo credit: Marc Israel Sellem/The Jerusalem Post)
Advertisement
With her most intense and confrontational style of delivery, Justice Minister Tzipi Livni on Monday said that "the settlements are not part of Israel's security, they are hurting it."Livni was speaking about the connection between the peace process and the economy at the Calcalist conference in Tel Aviv with Housing Minister Uri Ariel in the audience.Giving an example of what she meant, she slammed groups sending families to establish new illegal outposts, implying that they endanger and encumber the IDF with defending them as well as misusing the state's funds which could otherwise be used to improve the inflated housing prices across the country.The justice minister also said that she was angry with those who "are happy whenever they can say that there is no peace partner," so they tell us "do not even try."She added that really these same groups would say that "even if there was a partner we should not give up one meter of land, because they are not really ready for any compromise."Livni continued on the attack, saying that these groups "use 'security' as an excuse to convince the public that there is no option" for peace.Next, Livni said that some people focused on the world's and the Palestinian's hypocrisy and challenges in negotiations to say that "the whole world is anti-Semites" and try to "ignore the world."She predicted that this strategy would be disastrous as there was "already a glass ceiling on the Israeli economy" because of the dispute with the Palestinians and that "the ceiling is constantly coming down" on the state in a negative way.Despite the conference poll prior to her speech where 52% of the business attendees surveyed thought nothing would change with the Palestinians in 2014, she summed up her speech, noting that "we are obligated to resolve the dispute" with the Palestinians.Livni's top deputy, Environmental Protection Minister Amir Peretz, told Israel Radio on Monday that the recent vote by the Ministerial Legislative Committee approving the annexation of the Jordan Valley pushed Israel into an "unnecessary diplomatic pirouette from which it will be hard to get out of."The largely symbolic vote by right-wing ministers in Prime Minister Binyamin Netanyahu's center-right coalition who are skeptical of chances of clinching a two-state agreement with the Palestinian Authority was assailed by Peretz and former Labor chief Shelly Yacimovich on Monday.In a show of support for the valley that the Palestinians claim should be an essential part of their state, the Ministerial Legislative Committee voted eight to three to annex it to Israel."The ministerial vote and the expected announcement of new building in the settlements harms all of the achievements we have gained thus far," Peretz told Israel Radio, referring specifically to Horizon 2020, the European Union's flagship research and development program. 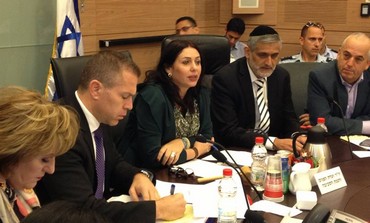 Israel's participation was in doubt after a diplomatic row with Brussels ensued over punitive guidelines which the EU issued against companies doing business over the Green Line.Peretz, the former defense minister who jumped from the Labor Party to Tzipi Livni's Hatnua faction because of its decidedly pro-peace platform, called on his boss to launch a diplomatic initiative."Israel could gain a lot of from a diplomatic move," Peretz told Israel Radio. "Are we going to prevent this from happening because of some worthless political trick?"Yacimovich said that Israel's current geopolitical situation allows it to make compromises on the Jordan Valley since there are no threats from the east.The former Labor chair said she believes the United States will offer its own proposal for a framework agreement. "Netanyahu will say 'yes,' and then nothing will happen," Yacimovich told Israel Radio."Netanyahu is a right-winger," she said. "There is no difference between him and [Economy Minister] Naftali Bennett."Palestinians warned Sunday that the symbolic Israeli ministerial vote to annex the Jordan Valley could destroy the peace process that US Secretary of State John Kerry is pushing to advance by heading to Jerusalem and Ramallah later this week.The vote “shows the extent of Israeli disrespect for international law and the efforts of the [Middle East] Quartet,” Palestinian Liberation Organization chief negotiator Saeb Erekat said.Livni, Finance Minister Yair Lapid, Health Minister Yael German and Science, Technology and Space Minister Yaakov Peri, have all said they will appeal the vote.Such an appeal places the matter directly in the hands of Prime Minister Binyamin Netanyahu, a move that many believe effectively kills the legislation.The Ministerial Legislative Committee must now revote the issue and that vote can only be held with Netanyahu’s approval. The legislation would also have to pass the Knesset before it becomes law.The bill, which was sponsored by MK Miri Regev (Likud) had the support of ministers from her party as well as those from Yisrael Beytenu and Bayit Yehudi on the legislative committee.Lahav Harkov, Khaled Abu Toameh, and Tovah Lazaroff contributed to this report.