Haniyeh denounces blockade on board 'Marmara'

By JPOST.COM STAFF
JANUARY 2, 2012 13:04
Haniyeh Mavi Marmara 311 R
(photo credit: REUTERS/Osman Orsal )
Advertisement
Hamas Prime Minister Ismail Haniyeh on Monday met with the IHH Humanitarian Relief organization, the group behind the 2010 Mavi Marmara flotilla, during a trip to Turkey. Nine activists were killed during an IDF raid on the Gaza-bound ship.In a press conference aboard the ship, Haniyeh denounced Israel's blockade on Gaza. He thanked Turkey for supporting Gaza, saying that the Marmara, which attempted to breach the blockade on Gaza, brought honor to Turkey and "captured the hearts" of Gaza residents. 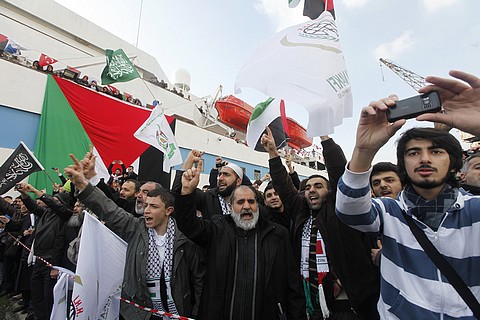 Hamas supporters chant anti-Israeli slogans in Istanbul, MondayOn Sunday, during his first trip out of Gaza since 2007, Haniyeh met with Turkish Prime Minister Recep Tayip Erdogan, and reportedly thanked him for supporting Gaza residents during Israel’s Operation Cast Lead two years ago.RELATED:
Israel, Turkey reactivate air force ties
'Mavi Marmara to be turned into a museum' Ties between Israel and Turkey have been strained since the flotilla incident, which Erdogan called "grounds for war" in a September interview with Al Jazeera. Israel expressed regret at the loss of life, but has refused to apologize for the incident.Haniyeh’s visit to Turkey follows visits to Egypt and Sudan. He is expected to meet with leaders also in Qatar, Tunisia and Bahrain.
Herb Keinon contributed to this report.