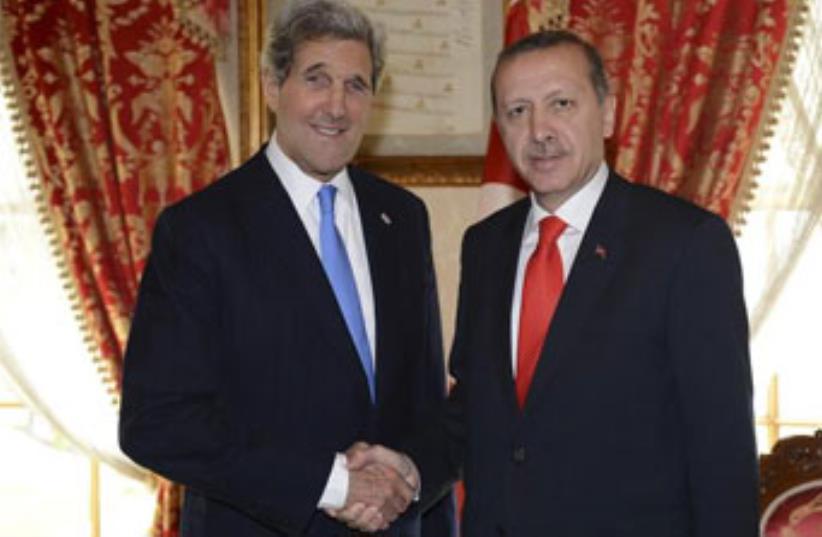 Kerry Erdogan 7.4.13 370
(photo credit: Reuters)
Advertisement
Israeli officials expressed astonishment on Sunday that US Secretary of State John Kerry praised Turkey for responding “sensitively” and without triumphalism to Israel’s apology for the Mavi Marmara incident.“They have taken steps to try to prevent any sense of triumphalism,” Kerry said at a press conference on Sunday with Turkish Foreign Minister Ahmet Davutoglu. “It has not come from the government. In fact, there has been limited response by the government itself and I think it’s important for everybody to take note of that.”“What country is he talking about?” one Israeli official responded. “I’m afraid the State Department did not show the secretary of state the press reports from Turkey following the apology.”The official said those reports were full of interviews and statements by both Turkish Prime Minister Recep Tayyip Erdogan, Davutoglu and other government ministers gloating over the apology, which was for operational errors committed that may have led to a loss of life on the Mavi Marmara in May 2010. Nine Turks were killed when Israel Navy commandos, trying to keep the ship from breaking the blockade of the Gaza Strip, were attacked by those on board.The Israeli perception that Erdogan was indeed rubbing Jerusalem’s nose in the apology led Economy and Trade Minister Naftali Bennett, a member of the seven-person security cabinet, to write on his Facebook page five days after the apology that “it seems that since the apology, Erdogan is doing everything to make Israel regret it. He is running a personal and vitriolic campaign at the expense of Israeli- Turkish relations.”Soon after Prime Minister Binyamin Netanyahu’s apology to Erdogan in a phone call brokered by US President Barack Obama during his visit here, Erdogan, according to the Anadolu news agency, told supporters Israel may have mistakenly thought the Mavi Marmara incident would be forgotten.But this time, he was quoted as saying, “the Israelis met with a different understanding and structure. The AK Party government did not remain silent against this illegality, aggressiveness and massacre.”He went on to add, “The Israeli apology was important in remembering the martyrs of Turkey and those of Palestine.”Billboards sponsored by the Ankara Municipality appeared within a day of the apology, reading, “Israel apologized to Turkey. Dear prime minister, we are grateful that you let our country experience this pride.”The words were superimposed over pictures of a confident Erdogan and a tired, gloomy looking Netanyahu.Fresh in the blush of the apology, Erdogan also announced immediately afterward that he was going to visit Gaza and the West Bank with Turkish relief organizations. He was also quoted by the Hurriyet Daily News as telling parliament that the apology changed the overall equation in the Middle East.“The point we have arrived at as a result of our consultations with all our brothers in Palestine and peripheral countries is increasing our responsibility with regard to solving the Palestinian question and thus is bringing about a new equation,” he was quoted as saying.Davutoglu hosted a dinner at his residence for the family members of those killed in the incident, as well as some officials of the radical Humanitarian Relief Foundation (IHH) that was behind the flotilla.One of IHH’s leaders was investigated by the Turkish government in 2012 for funding al-Qaida, and that same year the NGO was banned by Germany for its connections to Hamas.“Please make yourselves at home,” said Davutoglu. “This is your home as well. Their blood will not remain on the floor. Nothing is no longer the same,” stated the foreign minister, according to the website of the Turkish paper Sabah.If all that, and more that appeared in the Turkish press, “was not triumphalism, then I don’t know what is,” one Israeli official said.Kerry, meanwhile, urged Turkey and Israel to restore full relations, calling this vital to regional stability, but said it was not up to Washington to dictate the conditions of rapprochement.Kerry said it was imperative for Israel to honor its commitment to pay compensation to the families of those killed on the Mavi Marmara, and for both countries to return their ambassadors.“With respect to the Israel- Turkey track, it is not for the United States to be setting conditions or terms,” Kerry told reporters alongside Davutoglu.“We would like to see this relationship that is important to stability in the Middle East, critical to the peace process itself – we would like to see this relationship get back on track in its full measure,” he said.To do so, said Kerry, “it is imperative that the compensation component of the agreement be fulfilled, that the ambassadors be returned and that full relationship be embraced, but it’s not up to us to discuss the timing.”One thing that Kerry did not mention was Ankara’s boast afterward that Israel had agreed to lift the blockade of Gaza.Israel made no such pledge.An Israeli delegation is expected to arrive in Turkey this week to begin discussing the details of the compensation agreement. Neither country has said, however, when their ambassadors would go back, though the Turkish press speculated this could occur as early as the end of June.