Liberman to Chinese FM: Israel is serious about peace 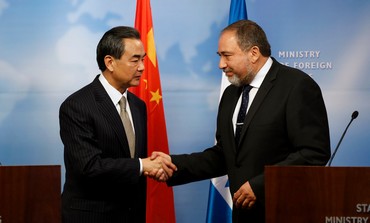 Israel FM Avigdor Lieberman meets Chinese counterpart Photo: REUTERS/Amir CohenIsrael is seriously pursuing peace, Foreign Minister Avigdor Liberman assured his Chinese counterpart Wang Yi on Thursday as the Palestinians charged that IDF violence was foiling those efforts."Israel is serious about reaching an agreement and I expect the Palestinians to contribute as well to the process," said Liberman after meeting with Wang at the Foreign Ministry in Jerusalem.
Video by Tovah Lazaroff.Wang is making his first visit to Israel and the Palestinian territories since becoming foreign minister earlier this year. Since his arrival on Tuesday, he has met with Prime Minister Binyamin Netanyahu and Palestinian Authority President Mahmoud Abbas.His visit was marked by a serious flare in Israeli-Palestinian violence. On Wednesday and on Thursday morning the IDF responded with live fire to serious attacks in Jenin and Kalkilya, killing two Palestinians with past histories of violence against Israel.The PA leadership strongly condemned the killings."This dangerous escalation is aimed at foiling American and international efforts to push the peace process forward," PA leadership said in a statement.It warned that the killings would lead the peace talks toward a dead end.Nabil Abu Rudaineh, spokesman for Abbas, called on the international community to "restrain" Israel.Abbas met on Thursday in his office in Ramallah with US peace envoy Martin Indyk to discuss the latest developments surrounding the peace talks between the PA and Israel.On Wednesday, in a meeting with reporters, Palestinian negotiator Saeb Erekat was skeptical that a final-status agreement was possible within the nine-month time table set by the US, which has the talks ending in April.Erekat made clear that the talks could go on for much longer, with the emphasis at the moment placed on establishing the outlines of a final accord, which would then have to be carefully defined."If we reach a framework agreement by April 29, you need six to 12 months to draft a full agreement," he told reporters in the village of Beit Jala, outside of Bethlehem.But Liberman said that an agreement was possible, urging the Palestinians to curb any unilateral actions toward statehood. He said that they would impede the process and not contribute to it.His statement struck a different tone from remarks he made earlier in the month at the Saban Forum in Washington in which he said that a peace deal was not possible by April.During his meetings with Israeli leaders, including President Shimon Peres that morning, Wang spoke positively about the peace process and the importance of ending the conflict.In a joint forum of Israeli and Palestinian scholars in Jerusalem on Thursday, Wang said that China, as a permanent member of the UN Security Council, had an important role to play in the peace process."China has a responsibility and obligation to contribute to advancing the peace talks," Wang said.He said that in May his country had hosted separate but simultaneous visits of both Netanyahu and Abbas. His country, he said, had a four-point plan to achieve peace, because it believes it's important to the stability of the region.It was his impression, Wang said, that "both the Israeli and Palestinian leadership have made it clear they are determined to find solutions to the issues that exist between them. Both sides believe that there is an important opportunity now for achieving peace and that this opportunity must be seized."Peace is a fundamental interest to Israelis and Palestinians, said Wang. He added that "both sides must stay on track" with the negotiations, so they can eventually reach a peace agreement.During his talks with Israeli leaders and with Liberman on Thursday, Wang discussed Iran.Liberman said that Israel is an "island of stability" in the rapidly transforming Middle East and expressed to his Chinese counterpart concerns over Iran's drive for nuclear weapons, the Islamic Republic's missile development and its part in spreading terror in the region."When the Iranians talk about the destruction of Israel, they mean it, and we take it seriously," Liberman stated.Liberman praised his Chinese counterpart for visiting Israel, calling the trip an additional step toward increasing cooperation and bilateral relations between Beijing and Jerusalem."We agreed to soon sign an agreement between our countries to mutually cancel the need for a visa for those holding diplomatic passports and service passports." Liberman said that easing visa restrictions between the countries would encourage business and tourism ties between the countries.Reuters and JPost.com staff contributed to this article.
Advertisement
Subscribe for our daily newsletter