Hadash MK Agbaria: Hamas is not a terrorist organization

No one is hurt by Hamas missiles, but Israeli bombs kill thousands...It's one big Isra-bluff, Arab MK claims; Likud MK Feiglin walks out of studio in outrage. 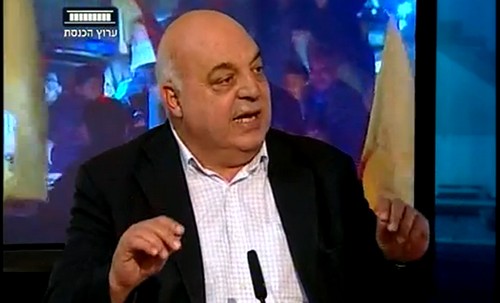 Hamas is a “liberation organization,” not a terrorist one, MK Afo Agbaria (Hadash) said on Monday in an interview with the Knesset Channel.According to Agbaria, Israel always has a list of “people they say are criminals” from Gaza. It arrests them, and then, when the response is missile fire, Israelis unjustifiably complain.“It’s one big Isra-bluff,” Agbaria said. “No one is even hurt by it or killed, but from one Israeli bomb 100, 1,000 people are killed.”Knesset Channel interviewer Orit Lavie-Nessiel said exasperatedly: “That’s an Isra-bluff? A million Israelis are living [under rocket fire from Gaza]. What you’re saying is not true!” Earlier in the program, MK Moshe Feiglin (Likud Beytenu) walked out of the studio because Agbaria compared the widow of Baruch Mizrahi, who was killed earlier this year – apparently by one of the 1,027 Palestinian terrorists released in exchange for captive soldier Gilad Schalit – to the wives of Palestinian prisoners.“Why are we talking about Hadas Mizrahi? Is she different from the wives of Palestinians? Why don’t you think of the other side?” Agbaria asked. “People are not born murderers,” the Hadash MK said of Mizrahi’s suspected killer. The situation in the territories is terrible. The occupation is the reason for it. No one is justifying murder, not of any person. I condemn it on both sides.”When asked to respond, Feiglin said, “This is the time to leave,” and dramatically walked out.“I will not legitimize through participation a conversation comparing IDF soldiers to Hamas murderers,” the Likud Beytenu MK later wrote on Facebook. “Instead of answering this false and despicable claim, I got up and left the studio. I call on MKs from across the political spectrum to boycott speeches of MKs who express such views,” he wrote.