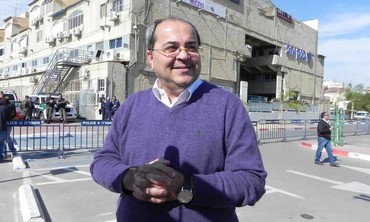 Israeli Arab leaders continued to drum up opposition on Thursday to Foreign Minister Avigdor Liberman’s proposal for land and population swaps with the Palestinian Authority as a part of a peace accord with Israel.Liberman had proposed that Israel offer the Palestinian Authority control over towns inhabited predominantly by Palestinians in exchange for settlements in the West Bank.“Foreign Minister Avigdor Liberman’s statements regarding territorial swaps are provocative,” said MK Ahmed Tibi (United Arab List-Ta’al). “We [Arabs] were in the Triangle before the establishment of the State of Israel. We didn’t come here on boats or planes.”“Liberman is an immigrant,” Tibi said. “If he wants to repartition the land, then let’s do it on the basis of UN Resolution 181.”The lawmaker was referring to the original partition plan proposed by the UN in 1947.
Video courtesy of Yasser Okbi.A senior Yisrael Beytenu source said “it’s very interesting and revealing that Tibi, who never misses an opportunity to talk about so-called discrimination against Arab Israelis, now seems so intent on maintaining his ID card and all the benefits that he enjoys in a country, which he constantly besmirches.”“This episode demonstrates more than anything else that Tibi’s whole political life has been nothing but a hypocrisy and a series of lies,” the source added.According to the Yisrael Beytenu source, Tibi’s claim that the Palestinian Authority would not accept population swaps is “just another chapter in a longstanding list of Arab rejectionism, starting in 1937 with the Peel Plan. The big question should remain why the PA and its president would not want this gift of a more educated, well-to-do population with an experience of democracy [Israeli Arabs].”“This rejection, like all previous ones, indicates to Israelis that certain Palestinian leaders do not even see a two state for two people solution at the end of the conflict,” the source concluded.Tibi’s comments came during a demonstration in Beersheba against the Prawer- Begin Plan for Beduin resettlement.Tibi was joined at the demonstration, which drew an estimated 700 protesters, by fellow United Arab List-Ta’al MKs Ibrahim Sarsour, Masud Gnaim, and Taleb Abu Arar.Also in attendance were Hadash MK Muhammad Barakei and the head of the Islamic Movement’s northern branch, Sheikh Raed Salah.Protesters waved Palestinian flags and brandished signs bearing the names of 44 unrecognized Beduin villages. Some of the demonstrators sang the Palestinian national anthem.Policemen were on the scene to ensure a peaceful conclusion to the event, which lasted an hour.Meanwhile on Thursday, opposition leader Isaac Herzog (Labor) voiced his support for a possible exchange of territory with a future Palestinian state as part of a peace agreement.“I would be happy to keep Samaria under Israeli sovereignty, but I would not rule out giving up territory in exchange for Ariel,” Herzog said to a group of students at Bar-Ilan University.
Advertisement
Subscribe for our daily newsletter