By JPOST.COM STAFF, MAYA SHWAYDER
netanyahu at UN october 1 370
(photo credit: REUTERS)
Advertisement
A steadfast Prime Minister Binyamin Netanyahu made clear in a speech to the United Nations General Assembly on Tuesday that Israel would not accept a nuclear armed Iran, and would "stand alone" if necessary to achieve that aim."Israel will not allow Iran to obtain nuclear weapons, even if we have to stand alone. Yet in standing alone, Israel will know that we will be defending many, many others," he said.The prime minister dismissed the recent so-called "charm offensive" by Iranian President Hassan Rouhani, charging that while his predecessor, Mahmoud Ahmedinejad, had been openly aggressive towards Israel, Rouhani was concealing his true intentions. The Iranians' goal, Netanyahu said, was an end to the sanctions that have crippled the Iranian economy and which were implemented over Teheran's intransigence on its atomic ambitions. It was with this goal in mind, Netanyahu said, that Rouhani was elected president."When it comes to Iran's nuclear weapons program, the only difference between them is this: Ahmadinejad was a wolf in wolf's clothing, Rouhani is a wolf in sheep's clothing, a wolf who thinks he can pull the wool over the eyes of the international community," Netanyahu said. 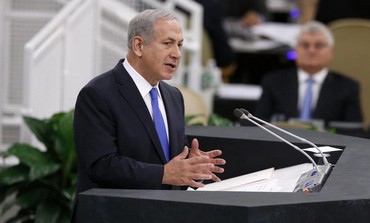 He also said that Iran's nuclear program had continued at a "vast and feverish" pace since the election in June of Rouhani."Like everyone else, I wish we could believe Rouhani's words, but we must focus on Iran's action," Netanyahu said, adding that sanctions should be tightened if the Iranians pursue nuclear projects while negotiating with world powers.Referring to the 1979 Islamic revolution in Iran, Netanyahu said, "Since that time, presidents of Iran have come and gone. Some presidents were considered moderates, others hardliners. But they have all served that same unforgiving creed, that same unforgiving regime. ... President Rouhani, like the presidents who came before him, is a loyal servant of the regime."Netanyahu made clear that Israel was prepared to resort to unilateral military action against Iran if it deems diplomacy a dead end.Meanwhile, Iran's delegation, of course, did not take kindly to the Israel's accusations, and in their reply said they "wish to thank sincerely all countries who continue to support Iran's sovereign right to peaceful nuclear science and technology." "Iran has an inalienable right to peaceful nuclear energy," said Mohammed Khazaee, Permanent Representative of Iran. Khazaee also echoed his president's words, saying "There is no single acceptable reason to possess a nuclear weapon, but agreeable reasons to abolish them all. Nuclear weapons have no place in the defense structuring of my country."Without ever referring to Netanyahu by name, he further poked fun at the Israeli Prime Minister, saying he was "trying to be more royal than than the king," and was still trying misleading the UN about the Iranian nuclear program, "but unlike last year, he did not bring the cartoon drawings.""Unlike Israel, Iran did not and would not attack any country," Khazaee said. "It is not because of its inability, but due to a principled policy in rejecting the use of force. Iranians are proud of being the best at exercising their inherent right to self defense under article 51 of the UN charter. Therefore, the Prime Minister better not even think about attacking Iran, let alone plan for it.""We have been accused of having a 'smile attack,'" Khazaee concluded. "As our Foreign Minister said, a smile attack is better than a military attack. Indeed, a smile policy is much better than a lying policy."The bulk of his speech was about Iran, but he also touched on the Israeli-Palestinian peace process, saying the Jewish state was prepared to make a "historic compromise," but he faulted Palestinian leaders for not reciprocating enough.Netanyahu ended his speech with a tale of the anti-Semitism suffered by his grandfather and his subsequent Zionism. "The people of Israel have come home, never to be uprooted again."Reuters contributed to this report