PM says he appreciates pontiff's stance against anti-Semitism, especially in light of rising Jew hatred as was seen in Brussels attack. 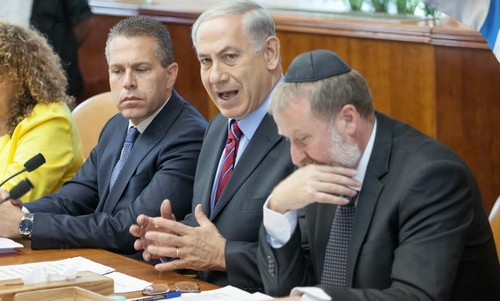 Prime Minister Binyamin Netanyahu welcomed Pope Francis to Israel, when he spoke Sunday before the weekly cabinet meeting."We welcome the arrival of Pope Francis to the Land of Israel, the Holy Land. His visit here is an opportunity to show the world the true Israel, the advanced, modern and tolerant Israel, in effect, the only country in the Middle East that ensures complete freedom of worship to those of all faiths, guards the holy places and ensures the rights of all – Jews, Muslims, Christians, everybody," he stated.Netanyahu said that he appreciates "the Pope's strong stand against anti-Semitism, especially in light of the surging Jew hatred that we have witnessed in recent days." He stated that the killing of four people, including two Israelis, outside of a Jewish museum in Brussels on Saturday was the result of "non-stop incitement against Israel by some in the Middle East and Europe itself."Netanyahu slammed those in Europe who are quick to condemn "the building of an apartment in Jerusalem, but do not rush to condemn, or weakly condemn the murder of Jews here or in Europe itself." The prime minister added that it was "even worse" that some in Europe had praised Fatah's unity agreement with Hamas.