PM: Iran’s stance on centrifuges means there can be no permanent accord 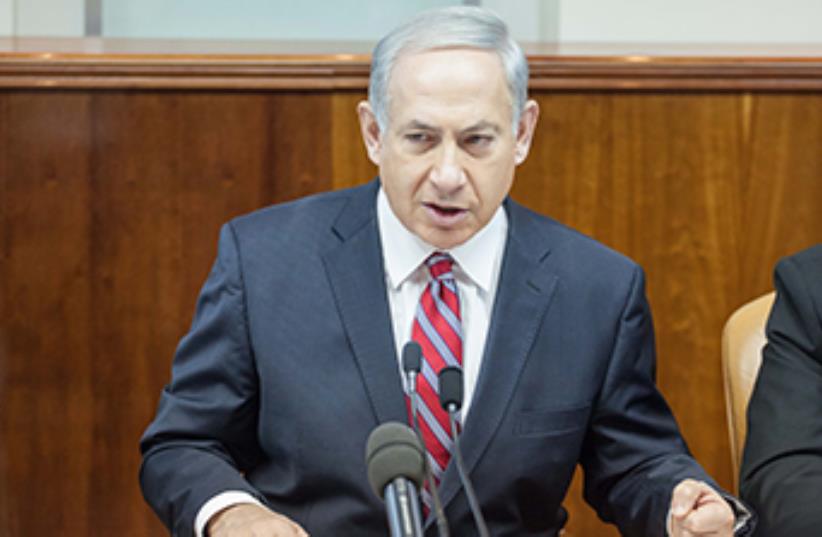 PM Netanyahu speaks at weekly cabinet meeting
(photo credit: EMIL SALMAN/POOL)
Advertisement
No permanent agreement with Iran over its nuclear program will be possible if Tehran continues to insist it will not dismantle a single centrifuge, Prime Minister Binyamin Netanyahu said Sunday.Netanyahu’s comments, made at the opening of the weekly cabinet meeting, came less than a week after the interim agreement with Iran to halt some elements of its nuclear program went into effect.Iran, and not negotiations with the Palestinians, dominated his talks with world leaders at the World Economic Forum in Davos, Switzerland, the prime minister told the cabinet just hours after his return. He told ministers that the most important thing Iranian President Hassan Rouhani had said during his speech to the conference was that Iran had not dismantled, and will not dismantle, a single centrifuge.“If Iran stands by that statement, that means that a permanent agreement – which is the goal of the entire diplomatic process with Iran – cannot succeed,” Netanyahu said.“Iran is basically insisting on preserving its ability to get fissile material for a bomb without in any way extending the time-line to a nuclear break-out.”This means, he said, that much of what Israel has been warning about in objecting loudly to the interim agreement was already coming true.The prime minister said that, while in Davos, Rouhani had also tried to break the sanctions regime against his country. While praising US Secretary of State John Kerry for his statement that the US would act to preserve the existing sanctions, Netanyahu said the test would be in the implementation.He added that Rouhani’s speech, coupled with an interview given by his “exceedingly moderate” Foreign Minster Mohammad Javad Zarif – who declared that Iran has an ideological agenda that puts it in perpetual conflict with the West and the US – led the people he spoke with in Davos to understand that the situation with Iran was “not rosy.”“There is a problem here,” Netanyahu said. “We know the truth. There is a regime here that, under the cover of a charm offensive, is trying to arm itself with nuclear weapons, to become a [nuclear] threshold sate that can achieve nuclear weapons very quickly, and a state that has not changed its true ideology at all.”He said that while there is an internal struggle taking place inside Iran for reform, there has been no change, either in the country’s goal of attaining nuclear weapons or in its aggressive policy and use of terrorism throughout the Middle East and beyond.These comments by the prime minister stand in contrast to the tenor of remarks on Iran that Kerry delivered in Davos on Friday. While Netanyahu said the Iranians were insisting they would not dismantle a single centrifuge, Kerry stressed in Switzerland that under the interim agreement, “Iran cannot increase the number of centrifuges that are in operation, and it cannot install or use any next-generation centrifuges to enrich uranium.”Regarding the question of how long it would take Iran to become a nuclear state once it makes the decision to do so (a span of time Netanyahu said had not been extended by the interim agreement), Kerry maintained that the different elements of the agreement “will increase the amount of time that it would take for Iran to break out and build a bomb – the breakout time, as we call it – and it will increase our ability to be able to detect it and to prevent it.”Among other leaders Netanyahu met with in Davos were the presidents of Nigeria and Mexico, the prime ministers of Australia and Norway, and the foreign minister of China.