Kadima's Shai takes offense to GPO photos released in which Netanyahu "took center stage"; Labor's Cabel: It's PM's right to do what he did.

By Gil Stern Stern HOFFMAN
OCTOBER 18, 2011 15:38
Schalit in IDF uniform 311
(photo credit: IDF spokesperson)
Advertisement
Prime Minister Binyamin Netanyahu should have behaved more modestly in his handling of the release of Gilad Schalit, Kadima MK Nachman Shai said Tuesday.Shai, who enthusiastically supports the deal, referred to the photo opportunity at the Tel Nof Air Force Base in which Netanyahu greeted Schalit.RELATED:
PM: Freed prisoners who return to terror do so at own risk
Schalit: I thought I'd be held captive for years to come“The prime minister displayed rare leadership for him, and he did the right thing when he emphasized the Jewish and Israeli values that the prisoner exchange is based on,” Shai said. “[But] it would have been better had he chosen to limit himself to that and enable the family to enjoy the return of their son. He went a little bit too far.”Shai took offense to the photos released by the Government Press Office in which Netanyahu took center stage.“The picture the Prime Minister’s Office released tells the whole story,” Shai said.“Gilad Schalit’s face is hidden. His father is barely seen. As long as Netanyahu is there looking at the two of them, smiling happily. These are occasions when modesty and restraint are required.” 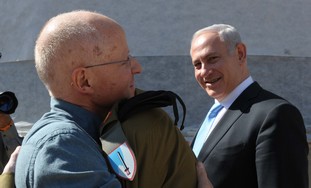 Kadima MK Yohanan Plesner was more subtle in his criticism, saying “There is no point in responding to Netanyahu’s effort at public relations for himself today, because no one would listen.”But Labor MK Eitan Cabel, who refused to serve in Netanyahu’s cabinet and often criticizes the prime minister, said he had nothing negative to say about his handling of the situation.“It is [Netanyahu]’s right to do what he did, especially at this stage,” Cabel said.“He is the one who released Gilad.”Channel 10 reported that a photograph released by the GPO of Schalit saluting Netanyahu presented an inaccurate picture and that Schalit was really saluting Chief of General Staff Lt.-Gen.Benny Gantz, who was cut out of the picture. The Prime Minister’s Office denied the report and the GPO released a video showing that Schalit had actually saluted Netanyahu and then Gantz.“I recommend focusing on more professional considerations,” Netanyahu’s spokesman Yoaz Hendel told the channel.