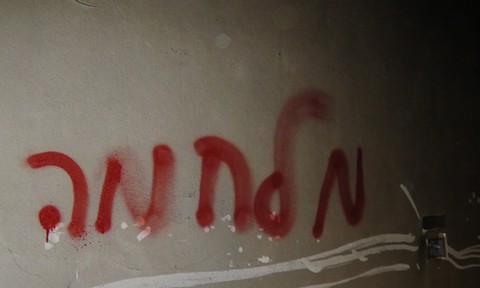 The mosque was set alight Thursday morning in Kfar Burka in the Binyamin region of the West Bank. Carpets and chairs in the mosque were damaged in the incident.Graffiti on the mosque walls saying "Mitzpe Yitzhar" and "war" indicates that the attack was a  "price tag" response to the dismantling of two buildings in the illegal Mitzpe Yitzhar outpost several hours earlier. Security forces went into Kfar Burka to investigate the incident, however they left after residents threw stones at them and protested their presence in the village. 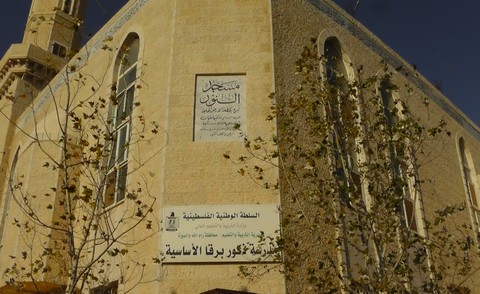 In an additional incident Thursday morning the IDF arrested a suspect at the Tapuah Junction for spray painting graffiti saying "Nazi" and "Price Tag" on a concrete block near an IDF position. The far-right-wing activist refused to identify himself.Meanwhile, President Shimon Peres and a delegation of settler leaders in Judea and Samaria that met Thursday, announced that there is no justification for violence or incitement against soldiers in the Israel Defense Forces or ordinary citizens regardless of race or religion. While disputes are legitimate, they said, baseless hatred and violence are not.RELATED:Analysis: Time to create deterrenceArson, 'price tag' suspected at J'lem mosquePeres, Yesha chairman Danny Dayan and Rabbi Elie Sadan agreed that demonization of all the settlers of Judea and Samaria on the basis of the brutal and criminal acts of a few is uncalled for. Regardless of differences of opinion, they said, there must be mutual respect and civilized dialogue.All three made the point that the IDF is a people's army, made up of different sectors of the population, and that religiously observant soldiers are not different to secular soldiers in terms of loyalty and trust.Opposition leader Tzipi Livni (Kadima) also released a statement Thursday, responding to Prime Minister Binyamin Netanyahu's announcement Wednesday night of new measures to address recent extreme right-wing escalations.Netanyahu either doesn't understand, or doesn't want to deal with extremist ideology, said Livni. Netanyahu had stated that Jews rioting in the West Bank will now be tried in military courts like Palestinians. However, he rejected calls by ministers to class suspects as terrorists."There is a struggle for Israel's image," Livni went on. "To this struggle, an extreme right-wing coalition is teaming up with a number of rabbis who want to impose a 'Halachic [Jewish law] state', and young people who are trying to impose their ideology on us, the Zionist majority." She called for the "Zionist majority" to "stand on the other side of this struggle.... [and] fight for the character and nature of Israel."This government... is laying fertile ground for these tumors. When Netanyahu says that we are dealing with rioters and not ideological crime, it indicates one of two things - either he doesn't understand what is happening here, or he doesn't want to deal with this extremist ideology because of his natural coalition partners," Livni asserted.Yaakov Katz contributed to this report
Advertisement
Hot Opinion