Palestinian prime minister pulled over by Israel for speeding

Premier's convoy was driving along Route 60 between West Bank towns of Ramallah and Nablus.

Palestinian Authority Prime Minister Rami Hamdallah was pulled over on Tuesday for speeding while driving along Route 60 connecting the West Bank towns of Ramallah and Nablus, according to Israel Radio.

Israel police pulled over the vehicle carrying Hamdallah after it was determined to be driving above the speed limit, according to Israel Radio.

At around 10:00 a.m., an IDF officer in the vicinity noticed a convoy of vehicles that was “driving at recklessly at excessive speeds and posing a danger to the public.” 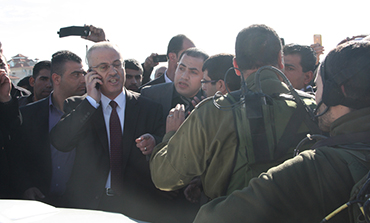 Palestinian Authority Prime Minister Rami Hamdallah after being pulled over by Israeli authorities in the West Bank. (Farah Studio)

According to Channel 10, the officer added that the convoy was guilty of numerous traffic violations, including crossing a solid yellow line dividing the road. The drivers finally pulled over after the officer tracked them down and signaled to them to stop.

“In an attempt to probe the matter, the officer was attacked and he did not get their cooperation,” the police said.

“At this point we learned that it was the convoy of the Palestinian prime minister, Rami Hamdallah,” a police source told Channel 10.