“Israel must be able to defend itself, by itself, against any threat,” Netanyahu says ahead of meeting with US secretary of defense.

By TOVAH LAZAROFF, YAAKOV LAPPIN
Netanyahu and Hagel 370
(photo credit: Moshe Milner/GPO)
Advertisement
Israel cannot accept a nuclear Iran and it reserves the right to defend itself against this threat, Prime Minister Binyamin Netanyahu told visiting US Secretary of Defense Chuck Hagel before their meeting on Tuesday morning.“Israel must be able to defend itself, by itself, against any threat,” Netanyahu said.He thanked the United States for its continued support, particularly in the defense and security arenas.“It reflects a very deep alliance between our two countries and the defense of our common interests and our common values,” he said.Israel and the US have greatly enhanced their security and defense relationships in the last four years, Netanyahu said.“I am absolutely confident that we [will] continue to further strengthen this under your stewardship of the American defense establishment,” he said.Earlier, Hagel visited the IDF’s elite Oketz dog unit at a special training facility near Modi’in.Hagel spoke with some of the special forces and was shown an exhibition of their capabilities. 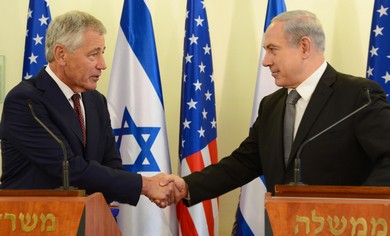 PM Binyamin Netanyahu with USA Secretary of Defence Chuck Hagel, Jerusalem.From Israel he heads to Jordan, Egypt, Saudi Arabia and the United Arab Emirates before returning to the US on April 26.Before meeting with Netanyahu, Hagel lauded his country’s relationship with Israel.“The region is not getting any less complicated. This is a difficult and dangerous time. This is a time when friends and allies must remain close, closer than ever,” Hagel said.“I’m committed to continue to strengthen this relationship, secure this relationship, and as you know, one of the main reasons I’m here is to do that.“I believe together, working with our allies and our friends, we will be able to do what is right for your country, [and] my country, and make this region a better region and a more secure region, and make Israel more secure,” he said.Hagel arrived in Israel on Sunday to conclude a major arms sale, that includes V-22 Osprey helicopter-plane aircraft, refueling tankers, advanced radars for fighter jets and advanced missiles that target air defenses.The arms deal is part of a wider $10 billion package involving US sales to Israel, Saudi Arabia, and the United Arab Emirates, designed to provide Washington’s allies in the region with enhanced military capabilities against Iran. The UAE will take stock of 25 F-16 Desert Falcon jets worth nearly five billion dollars.