By SAM SOKOL
JANUARY 29, 2013 03:20
PA President Abbas with PM Netanyahu 311 (R)
(photo credit: Jonathan Ernst / Reuters)
Advertisement
While not ready to sign a comprehensive peace deal, Prime Minister Binyamin Netanyahu is willing to establish an interim Palestinian state without a final agreement, former deputy foreign minister Yossi Beilin said on Monday.Speaking during a debate with outgoing settlement council head Danny Dayan, Beilin stated that he had heard from Netanyahu that he would be ready for establishing a “provisional border with the Palestinians.”“This is something that I heard from him that he would be ready to do it,” he stated.The debate, held at the David Citadel Hotel in Jerusalem, was organized by the American Jewish Committee.“Both sides prefer a permanent agreement but are not ready for it under either’s current leadership,” Beilin continued.Beilin, who was one of the primary architects of both the Oslo Accords and the Geneva Initiative, a framework for peace negotiated outside of official government channels, noted that “what can be done is an interim agreement which establishes a Palestinian state in provisional borders so that Netanyahu will not have to negotiate now about Jerusalem.” 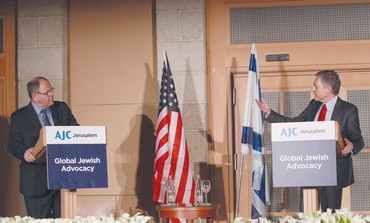 “Netanyahu, far from being a warmonger, is a very cautious person and therefore not the one [to sign] a permanent agreement. This is not because he doesn’t want it but because he is not ready to pay the price.”Beilin negated the possibility of an accord such as his Geneva Initiative being workable in the current political climate or with the “current government.”He also asserted that instead of the prime minister being forced to deal with the issue of forcibly evacuating settlements, any settlers who would wish to remain in their homes under Palestinian sovereignty would be allowed to do so. Those not wishing to live within a Palestinian state would be resettled, Beilin said, possibly even in other areas over the green line that Israel would retain.“Knowing Bibi,” he said, using Netanyahu’s nickname, “I believe an interim solution could be realistic.”However, the Prime Minister’s Office denied Beilin’s statements. Speaking to The Jerusalem Post in response to Beilin’s comments, PMO officials noted that Netanyahu “believes in direct negotiations with the Palestinians with no preconditions that would lead to, as described in the Bar-Ilan speech, a two-state solution based on a demilitarized Palestinian state that recognizes Israel.”Settlement council head Dayan also had an alternative peace plan on hand.Currently, he said, Israel and the Palestinians “are devising a modus vivendi that is moderately satisfying for everyone. It’s not idyllic or what we or Palestinians want, but it’s moderately satisfying, and in this region it’s a hell of an achievement.”There is currently no long-term solution, he said, but should Jordan experience regime change, it may be possible to push the idea of Jordan as a Palestinian state.“There is a significant chance for two states, Israel west of the Jordan River and Palestine to the east, with joint functional control over Judea and Samaria, although not shared sovereignty,” he speculated. “That will be the beginning of serious negotiations, in which Israel [eventually] rules the Jewish population there and Palestine rules the territory in which their people live there.”The debate was held during a dinner for the Board of Governors Institute of the AJC, which is currently in Israel as part of a regional tour.AJC director David Harris, whose staff organized the debate, noted that members of the board were granted an audience with King Abdullah of Jordan in Amman on Sunday and had met with both President Shimon Peres and Prime Minister Netanyahu on Monday.“This evening is sort of quintessential AJC,” Harris noted. “We always have a major debate as part of our programming. We invite people who are thoughtful and reasoned but have certain perspectives on key issues. We listen to them respectfully and we process the information. Tonight’s debate was very much in that spirit.”