Pope agrees to visit Israel after meeting with Peres

Audience with Pope results in acceptance of President's invitation to visit Israel, strengthen relations with the Vatican.

By GREER FAY CASHMAN, TOVAH LAZAROFF
Pope and Peres 370
(photo credit: Courtesy Spokesman of the President's Residence)
Advertisement
Pope Francis accepted a personal invitation to visit Israel during his meeting with President Shimon Peres – one of the first world leaders to be granted an audience – in the Vatican’s Apostolic Palace on Tuesday.“The citizens of Israel see in you a leader of peace and good will. The sooner you visit the better, as in these days a new opportunity is being created for peace, and your arrival could contribute significantly to increasing the trust and belief in peace,” said Peres.The pope accepted the invitation “with willingness and joy,” a Vatican spokesman said, but there was no indication when a trip would be made.Peres was also granted an audience with the previous pope, Benedict XVI, who like his predecessor John Paul II, visited Israel and in his case, planted an olive tree in the presidential garden in 2009.The president told the pope that his leadership created “a new spirit of hope for peace” at a time when religious leaders in the Middle East were advocating terror and bloodshed. 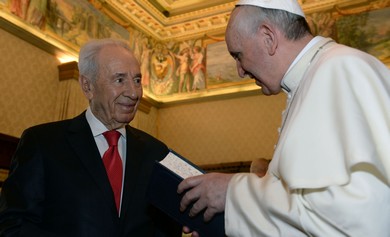 “We all have an obligation to stand up and say, in a loud and clear voice, that the Lord did not give anyone the authority to murder and carry out bloodshed,” Peres said.The pope shared his plan for an international peace convocation, with spiritual leaders of many faiths, which will call for an end to violence, “in a loud, clear voice.”“I turn to you and ask that within your sermons in front of millions of believers in the world you include the hope for peace in the Middle East and the whole world,” Peres said.The pope had already made an appeal for peace between Israelis and Palestinians in his Easter address last month.He also spoke out strongly on the need to combat anti-Semitism.A Vatican statement said the two discussed prospects for a resumption of negotiations for a solution that would respect “the legitimate aspirations of the two peoples, thus decisively contributing to the peace and stability of the region.”They agreed on the need for a political solution to the civil war in neighboring Syria. Peres also updated the pope on recent developments in the Middle East, saying the region’s greatest problems are hunger and poverty, political instability and unemployment.At the conclusion of the meeting, Peres presented the pope with a specially bound Bible with a passage from the Book of Kings on the cover: “So that you may prosper in all you do and wherever you go.”Prior to leaving for Rome on Monday, Peres said one of the purposes of his meeting with the pontiff was to strengthen the existing good relations between Israel and the Vatican – which he said, has an important role to play in the stability of the Middle East in endeavors towards peace.On the day of Peres’s departure, Palestinian Christians from Beit Jala, near Bethlehem, published an open letter entreating the pope to intercede on their behalf and prevent the construction of a separation wall which would isolate them from Jerusalem.Peres also met with Cardinal Tarcisio Bertone, the prime minister of the Holy See, and with Italy’s Prime Minister Enrico Lette. The president wished the new premier success and drew his attention to the dangers posed by a nuclear Iran and Syria’s chemical weapons.Lette told Peres that good relations between Israel and Italy were important to him and that he would invite Israel’s government ministers to a joint meeting in Rome later in the year.Reuters contributed to this report.