Strategic affairs minister warns of security risks if Israel pulls forces out from "the only possible reasonable defense line in the east, vis-a-vis Iran and its proxies." 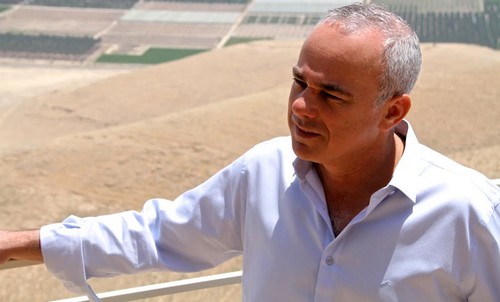 Strategic Affairs Minister Yuval Steinitz overlooks the Jordan Valley May 21, 2014. (Tovah Lazaroff)
Strategic Affairs Minister Yuval Steinitz overlooks the Jordan Valley May 21, 2014. Photo: Tovah LazaroffStrategic Affairs Minister Yuval Steinitz can’t see Iran as he stands on one of the highest peaks in the Jordan Valley. But the Islamic regime, some 900 miles away as the crow flies, is one of the most important reasons he has hiked – in black dress shoes better suited for the office – off the paved path and up and down rocks.Now that he is perched at a dramatic lookout point, its sweeping view underscores to him his deep strategic belief that the Jordan Valley must remain in Israel’s hands.Below him are date farms with palm-tree groves and hot houses that grow spices and peppers. To his right, lies the Dead Sea. And in the distance loom the red desert mountains of the Hashemite Kingdom. “On the second bank, that is already Jordan, with complete territorial connection to Iraq and then Iran,” Steinitz said, as he pointed in the direction of the horizon.“Anyone who comes here can understand that Israel cannot give up the Jordan Valley,” said Steinitz.“If we pull out from the Jordan Valley we will really risk Israel’s security and its very existence,” he said.“The Jordan Valley is the only possible reasonable defense line in the east, vis-a-vis Iran and its proxies,” said Steinitz. This includes al-Qaida and Hezbollah, he said.Aside from the threat of a nuclear Iran, there is also a danger that a withdrawal from the valley would allow Iran-sponsored terrorism to flourish there, Steinitz said.“If someone thinks we can afford moving the line [the border] from here 50 kilometers to the west, this will be a disaster,” he said.Only the IDF can perform the vital mission of securing the valley, Steinitz said.This task can’t be left to an international security force, he said and added that it could not be done by Palestinians or Europeans.The Palestinians have insisted that Israel withdraw from the valley so that it can be folded into the future borders of their state.Israel’s insistence that the valley must remain in its hands for security reasons was one of the deep disagreements that marked the nine-month negotiating period which ended on April 29.Although the talks were secret, this particular issue seeped out of the negotiating room, with both sides exchanging harsh rhetoric on the issue.Jordan Valley Regional Council head David Elhayani believes that during those talks Israel agreed to give up the Jordan Valley after 10 years, once a Palestinian state has established a decade-long track record of peace and democracy.Israel’s insistence that it must have the right to maintain an IDF presence scuttled the deal, he said.Meanwhile, Elhayani has developed a plan to triple the Jordan Valley population from 4,509 in 2013 to 15,000 within 10 years.And he is lobbying ministers and politicians to support the region as well as building and development there. Steinitz, Elhayani said, has been such a strong advocate of the valley that on Tuesday he was honored as a Distinguished Citizen of the Jordan Valley.Together, Elhayani and Steinitz toured the valley.They met with farmers who complained about boycott efforts and pricing issues.Elhayani asked Steinitz to take a stand against the silent freeze which settlers believe was put in place by Prime Minister Binyamin Netanyahu to help foster a climate conducive to the resumption of talks.It is their understanding that Netanyahu instructed the civil administration and Housing Authority to halt the advancement of building plans and the publication of tenders.Elhayani and other settler leaders have asked ministers to take a stand against the silent freeze.But Steinitz told The Jerusalem Post that no such freeze existed, and even if there was a temporary planning delay, it didn’t constitute a freeze.He said he supported Elhayani’s plan to triple the valley’s population and that it was important for settlements to remain in the valley.The IDF alone cannot secure the valley, he said, and added that it must have Jewish inhabitants.Any final-status agreement with the Palestinians must leave the Jordan Valley in Israel’s hands, Steinitz said.“The Palestinians will have to recognize that if they want to have their own state, they have to make some compromises,” Steinitz said.
Advertisement
Subscribe for our daily newsletter