By TOVAH LAZAROFF, MELANIE LIDMAN
Construction 521
(photo credit: REUTERS)
Advertisement
Palestinian Authority President Mahmoud Abbas on Sunday slammed Israel’s plans to issue tenders to build 1,028 Jewish homes in east Jerusalem and two West Bank settlements.The decision “contradicts efforts to revive the peace process,” Abbas spokesman Nabil Abu Rudeineh said according to the Palestinian news agency WAFA.RELATED:US, UN, EU condemn ‘accelerated’ W. Bank Jewish building PA, opposition decry West Bank building decision According to information published by the Construction and Housing Ministry on Sunday, 500 of the units will be located in Har Homa, a Jewish neighborhood in east Jerusalem.The tender is one of the last major bureaucratic steps for a 930-unit project in Har Homa. The ministry published the tender for the remaining 430 units a month ago.The Jerusalem Municipality and the Interior Ministry finished the approval process for the project in August. It will still be a number of years, however, before the infrastructure – including roads, sewage pipes and electricity – will be completed.Left-wing activists see Har Homa as one of the most controversial Jewish neighborhoods in the capital, because it was started after the Oslo Accords were signed and because it creates a barrier of Jewish homes between east Jerusalem Arab neighborhoods and Bethlehem.“[Prime Minister Binyamin] Netanyahu is not only attempting not to make peace, he’s also going forward with plans that will make peace impossible in the future and make it impossible to have two states for two peoples,” said Hagit Ofran, who heads Peace Now’s Settlement Watch team. 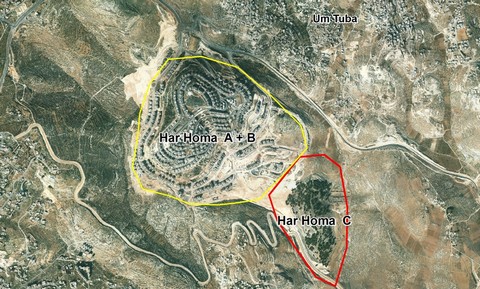 Map of east Jerusalem
The quest for “continuous territory” is an explosive issue, and one that presents a severe stumbling block to negotiations about a future Palestinian state, Ofran said.City Councilor Elisha Peleg (Likud), who sits on the Local Planning and Construction Committee, welcomed the planned apartments, which would solve part of the housing shortage for young couples, recently released soldiers and working families, he said.“There are no apartments here and it’s a good thing they’re building everywhere in Jerusalem, there’s no difference if it is over an historical line or not,” he said.The Construction Ministry on Sunday also announced tenders for 348 homes slated for the Betar Illit settlement located south of Jerusalem, in Gush Etzion, 400 meters over the pre-1967 line. The Defense Ministry first authorized the project in April, in the aftermath of the terrorist attack in the Itamar settlement, in which two Palestinians stabbed to death five members of the Fogel family, including an infant, in their home.Tenders will also be issued for 180 homes in the Givat Ze’ev settlement, located north of Jerusalem, 4.9 km. over the pre-1967 Green Line.The new homes were part of an announcement regarding plans for 6,000 across the country.Homes for Gaza evacuees were included in the tender announcement, with 300 to be published for Nitzanim, located between Ashkelon and Ashdod, and 229 in Ashkelon’s “Golf” neighborhood.In November, the government said it planned to accelerate building in Jewish east Jerusalem neighborhoods to protest Palestinian unilateral moves at the United Nations, and the UNESCO decision to grant the PA membership.Netanyahu’s government has always insisted it has a right to build in Jerusalem.Palestinians have refused to negotiate with Israel until it halts Jewish building in east Jerusalem and West Bank settlement activity.Israel has refused to heed this request and has called on the PA to resume talks without pre-conditions. The PA broke off talks with Israel three years ago, to protest its attack on Gaza, known as Operation Cast Lead. It refused to resume them when Netanyahu took office in March 2009.Direct negotiations between the two sides were rekindled briefly in September 2010, but then were frozen when Israel refused to renew its 10-month moratorium on new settlement construction.According to Abu Rudeineh, the move to issue the new tenders coincides with what he described as an increase of so-called “price-tag” violence by settlers and right-wing activists against Palestinians as well as vandalism against their property and mosques in the West Bank. He called on the international community to stop Israeli settlement building, WAFA reported.Jerusalem Post staff and Reuters contributed to this report.