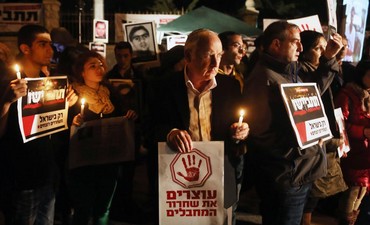 Almagor, the NGO that advocates for victims of terrorism, petitioned the High Court of Justice on Monday demanding that it stop the government from releasing Palestinians convicted for killing Israelis.The organization wants the court to issue an injunction against the move until it can fully hear the petition.As the Israeli government prepares to release 26 additional prisoners convicted of acts of terrorism before the signing of the Oslo Accords, the relatives of terrorism victims are also planning a large-scale demonstration in faint hopes of foiling the move.Almagor is arguing that the government has exceeded its authority by releasing Palestinians who are residents of east Jerusalem, and thus holders of Israeli identity cards.Some of the names of those due to be freed late Monday reside in east Jerusalem. Almagor is hoping that the High Court will at least delay the release and agree with its claim that freeing east Jerusalem residents would constitute an erosion of Israeli sovereignty in the capital.Video courtesy of Eli Mandelbaum.The organization is also demanding that the court permit a large-scale demonstration in front of the prime minister's residence as well as a procession to the Old City. The Jerusalem district police is opposed to such a procession. Almagor is arguing before the court that the police is limiting its right to free expression and the right to protest.Palestinian officials condemned on Sunday the "Israeli blackmail" that led to the postponement of the release of 26 Palestinian security prisoners by one day.The prisoners were scheduled to be released on Monday night at 1 a.m., but technical issues forced the postponement to Tuesday at 1 a.m.The Shin Bet had already transferred the 26 prisoners expected to be released to Ofer Prison west of Ramallah, the Palestinian Authority said.According to the PA, the prisoners will be released at 1 a.m. Tuesday after being identified and being medically examined by the Red Cross.The Palestinian Prisoners Club said that the number of Palestinian prisoners still left in Israeli prisoners who were jailed prior to the Oslo Accord is 32, instead of the 26 that were supposed to remain in prison according to the deal agreed on in July. Among them are 14 Israeli-Arabs and one prisoner from Jerusalem who has an Israeli ID.
Advertisement
Subscribe for our daily newsletter