Toronto Mayor's holiday (not crack) video and other Jewish connections

This YouTube treasure features a sweeter side of Mayor Ford: apple and honey in hand. 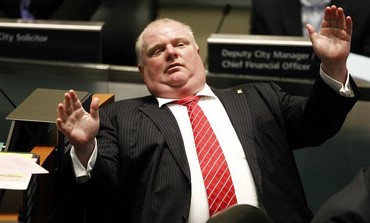 Toronto Mayor Rob FordWith the Jewish festival of lights just around the corner, it seems fit that a connection to the Jewish community for Toronto's crack-smoking Mayor Rob Ford resurface in time for the holiday.Although the video does not feature the mayor consuming illegal drugs with convicted drug dealers or hyperventilating during violent murderous rants, this YouTube treasure features a sweeter side of Mayor Ford: apple and honey in handThe video, recorded and posted by Toronto's Uptown Chabad congregation in 2011, features Rabbi Moshe Steiner explaining six key ways to observe Rosh Hashannah, while Rob Ford awkwardly lingers in the background, occasionally chowing down on the delicious holiday treats provided by the synagogue.A second Jewish connection for the scandalous mayor was reported in May, when 2010 Toronto-Mayoral candidate Sarah Thomson accused the embarrassing municipal leader of groping her behind at a gala for the Canadian Jewish Political Affairs Committee. In the end however, Thompson did not press charges. 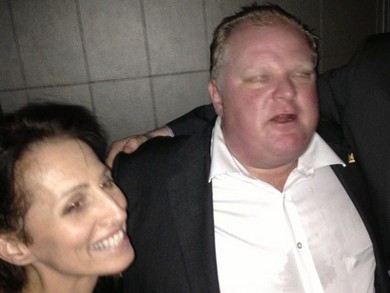 Toronto Mayor Rob Ford and Sarah Thompson at a gala for the Canadian Jewish Political Affairs Committee in 2012 (Facebook)“It’s a big waste of time to go through the legal procedures,” Thomson told the National Post. “Now, I looked at it and I realized I had no proof.”Ford has repeatedly denied the sexual harassment allegations, saying his behavior was not inappropriate, however this was most definitely not his final public humiliation. Ford also appeared in a 2012 Rosh Hashannah YouTube greeting, wishing all Jewish Torontonians a sweet new year. And another in 2012, holding a traditional Jewish Shofar, while the son of Uptown Chabad Rabbi Moshe Steiner, Meir, blows into the ancient Jewish instrument.Since the Rosh Hashannah 2011/2012 appearances on Uptown Chabad's YouTube channel and the March 2012 accusation of lewd behavior at a Jewish event, worse things have come out. Even with the recent admission of his substance abuse problem, Ford has refused to resign from his position as mayor, even though all power has officially been stripped from him and transferred to Deputy Mayor Norm Kelly. Even with apology after apology after apology, and with the international media continuously drilling him, his pride has taken over, and he will not step down. In fact, he refuses. Instead, Mayor Rob Ford's judgment continues to be clouded, and he continues to think he is a hero, and continues to drag down the reputation of the entire city of Toronto, and maybe even the entire country."A lot of people complain about a lot of things in this world," said the rabbi in the 2011 video, "but I’ve never heard anyone complain: my life is too sweet,” Steiner added, apple in hand.Ford better get to the grocery store and stock up on Granny Smiths and Busy Bee honey because after what hes been through lately, it looks like hes gonna need a sweet year. 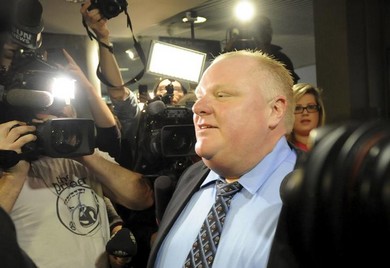