US secretary of state updates Arab leaders in region on latest developments in talks. 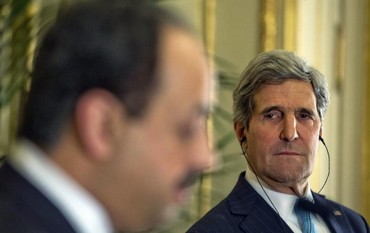 (US Secretary of State John Kerry listens to Qatari Foreign Minister Khaled Al-Attiyah. Reuters)US Secretary of State John Kerry told Arab League foreign ministers late Sunday that Washington was determined to bring Israel and the Palestinians together in an effort to end the decades-long conflict."As I made clear in my discussions with the Arab foreign ministers today, we really are at a critical point, as Palestinians and Israeli leaders grapple with difficult and challenging decisions that lie ahead," Kerry said. "Through the course of the last five months, President Abbas and Prime Minister Netanyahu have both demonstrated courageous and determined leadership," the secretary said. "They’ve made tough choices, and they are contemplating even tougher choices in the weeks ahead.""The Arab foreign ministers made clear to me that they support Israeli and Palestinian leaders’ efforts to take the next bold, courageous steps of agreeing to a framework for permanent status negotiations."Prior to Kerry's meetings with Arab League officials, State Department aides denied that efforts were under way to get the league to alter its 2002 peace initiative and recognize Israel as a Jewish state, thereby paving the way for the Palestinians to do the same.State Department spokeswoman Jen Psaki, at her daily press briefing Wednesday afternoon in Washington, denied reports that Kerry was pressing the kings of Jordan and Saudi Arabia to alter the Arab League peace initiative.Kerry met the kings of both countries on Sunday last week, and is scheduled to meet in Paris in the coming days with representatives of the Arab League’s Arab Peace Initiative Follow-up Committee to update them on the Israeli-Palestinian negotiations, as part of his continued efforts to drum up wide Arab support for the negotiations.Kerry said the next stage in talks with Iran on its nuclear program would be "very difficult" after an announcement on Sunday that an interim deal with world powers, designed to create space to reach a comprehensive pact, would take effect on January 20.
"The negotiations will be very difficult," Kerry said at a news conference in Paris with his Qatari counterpart.
Kerry also said on Sunday he was confident that Syrian opposition groups would attend peace talks in Switzerland later this month."Personally, I'm confident that the Syrian opposition will come to Geneva," Kerry told reporters in Paris.He said attendance was a "test of the credibility of everybody"."That's why I am confident they will be there," he said.The Western-backed Syrian National Coalition, which groups various Syrian opposition groups working from abroad, is due to decide on January 17 whether it will attend the talks, scheduled for January 22.Herb Keinon and Reuters contributed to this report.
Advertisement
Subscribe for our daily newsletter