US officials: Abbas playing for leverage, not trying to scuttle talks

Some White House officials believe that, despite Kerry's optimism, his mediation efforts have been exhausted. 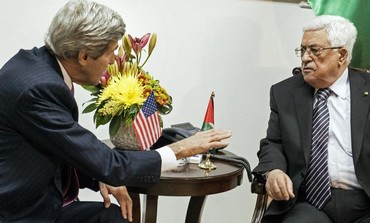 US officials believe the Palestinians were seeking leverage against Israel by applying for membership in 15 international organizations on Tuesday, rather than trying to torpedo negotiations, The New York Times  reported Wednesday.The fact that Palestinian Authority President Mahmoud Abbas did not apply to join the International Criminal Court was proof of his desire to continue the talks, the Times quoted the officials as saying, since that move is one that Israel fears could be used to contest its presence in the West Bank.US Secretary of State John Kerry said late Tuesday that despite the contentious move by Abbas, he fully intends to push negotiations forward.The secretary added that Abbas has kept his vow not to join any UN bodies and to continue the talks until their scheduled deadline of late April. However, Kerry's decision to cancel his return trip to Ramallah on Wednesday showed Washington's growing impatience with the stagnated negotiations, according to the Times.

There is an increasing belief in the White House that Kerry has reached his limit in mediation efforts and that Israel and the Palestinians must now work their way out of the current impasse on their own, according to the report.A spokesman for Prime Minister Binyamin Netanyahu declined to comment on Abbas's move.Deputy Foreign Minister Zeev Elkin, a hardliner in Netanyahu's Likud party, said Abbas's latest step had turned the proposed talks-extension deal into a farce.Meanwhile, Palestinian Authority Minister for Prisoners Affairs Issa Qaraqi placed blame for the impasse in negotiations on Israel's failure to carry out a fourth release of Palestinian prisoners on Saturday. In an interview with Army Radio Wednesday morning, he expressed his pessimism over the continuation of talks between the sides past their April 29 deadline, and called on Israel to reconsider its position on the final installment of a commitment to release a total of 104 long-serving prisoners as a gesture for resuming negotiations in July.Reuters contributed to this report.
Advertisement
Subscribe for our daily newsletter