Scores killed in 'Day of Rage' demonstrations in Egypt

CAIRO - Protests by supporters of ousted Islamist President Mohamed Morsi turned violent across Egypt on Friday, with over a hundred reported dead across the country as the Muslim Brotherhood staged a "Day of Rage."The army deployed dozens of armored vehicles on major roads around the capital after Morsi's Brotherhood movement called the demonstrations, and the Interior Ministry said police would use live ammunition against anyone threatening public buildings.Al Jazeera reported that at least 95 people were killed and hundreds were injured in Cairo's Ramses Square alone when army snipers fired at the crowds from helicopters flying overhead. Down on the ground, gunshots were heard and police fired salvos of tear gas at protesters.More than 40 people were also killed in provincial cities, taking the overall toll close to 100, although the intense shooting eventually died down in Cairo at dusk as a curfew began.A Reuters witness saw the bodies of 27 people, apparently hit by gunfire and birdshot, wrapped in white sheets in a mosque. A Reuters photographer said security forces opened fire from numerous directions when a police station was attacked.Men armed with automatic weapons appeared to be taking part in the Cairo protests. At Ramses Square, Reuters journalists saw three men carrying guns; protesters cheered when cars carrying gunmen arrived, another Reuters witness said.A security official said 24 policemen had been killed and 15 police stations attacked since late Thursday, underlining the increasing ferocity of the violence.Showing no sign of wanting to back down, the Brotherhood announced a further week of nationwide protests.The violence followed Wednesday's assault by security forces on two Brotherhood sit-ins in Cairo that left hundreds dead, as security forces tried to end weeks of turbulence following the army's toppling of Morsi on July 3.
Nile TV showed footage of one gunman among Islamist protesters firing from a city center bridge. Injured men, one with a bloody wound in the middle of his chest, were rushed away on the back of a pick-up truck.State television said 16 people died in clashes in Alexandria, Egypt's second city, and 140 were wounded. Eight protesters died in the coastal town of Damietta and five in Fayoum south of Cairo. The Suez Canal cities of Ismailia, Port Said and Suez all had deathtolls of four, as did Tanta in the Nile delta.
A police conscript was shot dead in the north of Cairo, state news agency MENA reported. Nile TV showed video of a gunman among Islamist protesters firing from a city bridge.Witnesses said Morsi supporters ransacked a Catholic church and a Christian school in the city of Malawi. An Anglican church was also set ablaze. The Brotherhood, which has been accused of inciting anti-Christian sentiment, denies targeting churches. 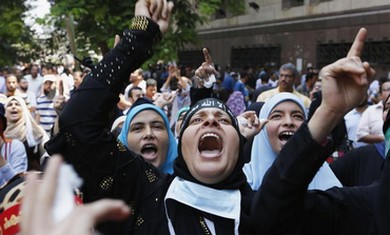 Morsi Supporters protest near Ennour Mosque in Cairo August 16, 2013. (Reuters)Deeply polarized Egypt has been bracing for further confrontation expected after Friday prayers between members of Morsi's Muslim Brotherhood and the army-backed government.The Brotherhood called for a nationwide march of millions to show anger at the ferocious security crackdown on Islamists.They have demanded the resignation of army commander General Abdel Fattah al-Sisi and the reinstatement of Egypt's first freely elected president, who is in detention and has not been seen in public since his downfall."Sooner or later I will die. Better to die for my rights than in my bed. Guns don't scare us anymore," said Sara Ahmed, 28, a business manager, joining a march of thousands of demonstrators heading downtown from northeast Cairo."It's not about the Brotherhood, it's about human rights," said Ahmed, one of the few women not wearing a headscarf, a sign of piety for Muslim women.When a military helicopter flew low over Ramses Square, protesters held up shoes chanting "We will bring Sisi to the ground" and "Leave, leave, you traitor."As the sound of teargas canisters being fired began, protesters - including young and old, men and women - donned surgical masks, gas masks and wrapped bandannas around their faces. Some rubbed Pepsi on their faces to counter the gas."Allahu akbar! (God is Greatest)" the crowd chanted.After protesters torched a government building in Cairo on Thursday, the authorities said security forces would turn their guns on anyone who attacked the police or public institutions. 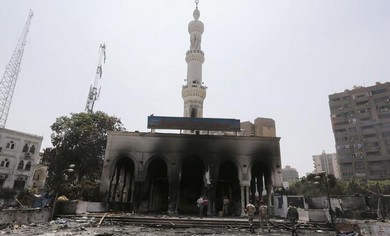 The destroyed Rabaa Adawiya mosque August 16, 2013. (Reuters)Wednesday's bloodshed was the third mass killing of Morsi's supporters since his ouster. The assault left his Muslim Brotherhood in disarray, but it said it would not retreat in its showdown with army commander General Abdel Fattah al-Sisi."After the blows and arrests and killings that we are facing, emotions are too high to be guided by anyone," said Brotherhood spokesman Gehad El-Haddad."Pain and sorrow"A Brotherhood statement called for a nationwide "march of anger" by millions of supporters on Friday after noon prayers."Despite the pain and sorrow over the loss of our martyrs, the latest coup makers' crime has increased our determination to end them," it said.The Brotherhood accuses the military of staging a coup when it ousted Morsi. Liberal and youth activists who backed the military saw the move as a positive response to public demands.But some fear Egypt is turning back into the kind of police state that kept Mubarak in power for 30 years, as security institutions recover their confidence and reassert control.Friday prayers have proved a fertile time for protests during more than two years of unrest across the Arab world.In calling for a "Friday of anger," the Brotherhood used the same name as that given to the most violent day of the uprising against former President Hosni Mubarak. That day, January 28, 2011, marked the protesters' victory over the police, who were forced to retreat while the army was asked to intervene. 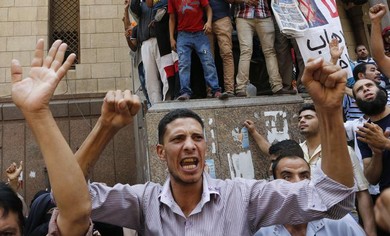 A pro-Morsi supporter takes part in a protest near Ennour Mosque in Cairo August 16, 2013. (Reuters)In a counter-move, a loose liberal and leftist coalition, the National Salvation Front, called on Egyptians to protest on Friday against the Brotherhood's "obvious terrorism actions".Signalling his displeasure at the worst bloodshed in Egypt for generations, US President Barack Obama said on Thursday normal cooperation with Cairo could not continue and announced the cancellation of military exercises with Egypt next month."We deplore violence against civilians. We support universal rights essential to human dignity, including the right to peaceful protest," he said, but stopped short of cutting off the $1.55 billion a year of mostly military US aid to Egypt.The United States on Thursday told its citizens to leave Egypt due to the unrest. It issued the same advice last month.The Egyptian presidency issued a statement saying Obama's remarks were not based on "facts" and would strengthen and encourage violent groups that were committing "terrorist acts".Pro-army groups posted videos on the Internet of policemen they said had been tortured and killed by Islamist militants.Washington's influence over Cairo has been called into question since Morsi's overthrow. Since then Saudi Arabia, Kuwait and the United Arab Emirates have pledged $12 billion in assistance, making them more prominent partners.Obama's refusal so far to cut off US aid to Egypt suggests he does not wish to alienate the generals despite the scale of the bloodshed in the army's suppression of Morsi supporters.Egypt will need all the financial support it can get in the coming months as it grapples with growing economic woes, especially in the important tourism sector that accounts for more than 10 percent of gross domestic product.The United States urged its citizens to leave Egypt on Thursday and two of Europe's biggest tour operators, Germany's TUI and Thomas Cook Germany, said they were cancelling all trips to the country until Sept. 15.On Thursday, the UN Security Council urged all parties in Egypt to exercise restraint, but did not assign blame."The view of council members is that it is important to end violence in Egypt," Argentine UN Ambassador Maria Cristina Perceval said after the 15-member council met on the situation.JPost.com staff contributed to this report.
Advertisement
Subscribe for our daily newsletter