By TAL SANDLER / NO CAMELS
Alchemy Research 370
(photo credit: Courtesy of Alchemy Research)
Advertisement
Tal Sandler writes for NoCamels.The era of clean technologies is hopefully only at its dawn and yet we have already witnessed extraordinary advances in the field. From solar windows that power-up buildings to energy-producing roads, to desalination plants and many more, cleantech achievements are piling up.So if powering cars with ‘electric powder’ may sound like a scam, think again. Israeli company Alchemy Research offers a new method to power electric cars by using energy stored in aluminum grains.Alchemy Research has developed a method of storage and conversion of energy. Their Alydro technology – standing for Aluminum-Hydro, is a process that produces energy from a reaction between aluminum and water.The outcome of this method, says company CEO Gideon Yampolsky, “is essentially an electric vehicle that is able to reach 2,400 km on a fuel tank that is the size of a standard fuel tank. A regular car that works on fuel is able to reach only 700- 800 km. Our fuel tank is the same size as a regular one and can last more distance.”Releasing energy from aluminumThe Alydro energy system can store large amounts of energy inside aluminum grains and release it on demand. Since aluminum is a very dense element, it can accommodate twice the amount of energy as fuel in the same volume. According to the company it can also store 80 times more energy per kg. than today’s best Li-ion batteries.Although aluminum is known for its ability to store a lot of energy, what was missing until now was a method to release it. Yampolsky started researching alternative energies three years ago. In the process he partnered with Irad Stavi and together they founded Alchemy Research.Their research focused on how to take this energy and release it, to use it for powering light bulbs or starting a car. The answer, they found, was water.The alchemyThe Alydro reaction takes place in a reactor at elevated temperatures of up to 900 Celcius. The reactor, compact enough to be installed in a vehicle, feeds on aluminum grains and water and produces hot hydrogen. This hydrogen is then converted into electrical energy that replaces the battery in an electric vehicle.The products of the reaction are warm air and water vapor which are later chilled and reused. “The water is not consumed, it is returned to the tank after it goes through the process. Even though the system works on aluminum and water, in practice it doesn’t use up the water,” Yampolsky tells NoCamels. 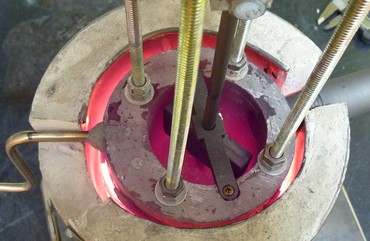 According to the company, none of the substances involved in the process are toxic or polluting: “Alydro is carbon-free, with zero greenhouse gas emission.” The only by-product of the Alydro reaction is solid aluminum-oxide known as alumina, which is fully recyclable. In fact, alumina is the material used for producing aluminum in the first place so it is collected for recycling back into aluminum.Cost-efficient?Today, the price of powering a car with fuel is the same as using aluminum. However, according to Yampolsky, this is expected to change due to the fact that gas prices are on a rise, as opposed to the price of aluminum recycling that will decline as the technology keeps improving. “We’re not mining natural resources, and technology is always perfected and becomes cheaper and more effective with time,” he adds.The company expects that by the time the system is ready to go on the market the financial benefits will be larger than the present system of gas and fuel. They expect that “in about five years, when the price of one liter of gas probably will cost the American consumer $1.6, the price of one kg of aluminum powder will be only 1.1 dollars.”“As opposed to gas that emits many pollutants, we just heat the air. The only cost is the electricity that heats the air. Not only does the system not pollute, it does not react with the environment; it doesn’t add anything or take anything from the environment which is a step ahead of non-pollution. It is based on renewable energy sources, and all its by-products are recyclable,” concludes Yampolsky.'Light up an entire city'Besides powering vehicles, the technology can also be used to solve the problem of energy storage. An electric grid, as a network for delivering electricity from suppliers to consumers, must be reliable. Still, the leading renewable energy sources – solar and wind – are intermittent. To balance supply and demand, energy needs to be stored during high availability periods and be used later on when power consumption exceeds supply.Alydro enables energy storage and extraction in a sustainable process. The energy is stored inside the aluminum, goes into the Alydro reactor and produces aluminum-oxide that will be used again the next day for the electrolysis process.“By day we make aluminum, and by night we turn it back to aluminum-oxide. What we get is energy in the form of hydrogen that can be used in a gas turbine and light up an entire city,” says Yampolsky.The company states that both aluminum and aluminum-oxide are nontoxic, nonflammable and nonpolluting. With Alydro energy storage, energy can be stored for decades in the aluminum itself with no degradation.The young company, founded in 2012, says that it is “dedicated to developing Alydro technology to make clean and sustainable transportation a reality.” They are also planning on developing systems for on-site power generation and production of hydrogen.NoCamels - Israeli Innovation NewsFollow @JPost_Lifestyle
Advertisement
Hot Opinion