The deal will provide 1.8 billion cubic meters of gas to the companies Arab Potash and Jordan Bromine over 15 years beginning in 2016.

By SHARON UDASIN
FEBRUARY 19, 2014 16:30
The Tamar gas processing rig off the coast of Israel 370
(photo credit: Noble Energy)
Advertisement
The Tamar natural gas reservoir’s developers signed a $500 million deal on Wednesday to provide gas to Jordanian companies.It is the first export agreement from the basin 80 km. west of Haifa. 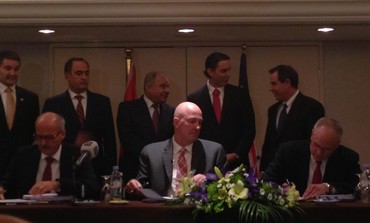 Noble Energy representatives sign gas deal with Jordan.
Representatives from Noble Energy signed the deal to provide 1.8 billion cubic meters of gas to Arab Potash and Jordan Bromine over 15 years beginning in 2016. The two companies will use the gas for their facilities near the Dead Sea, but the agreement will not affect the supply of gas to the domestic market, Noble Energy stressed. Representatives from each company participated in the signing on Wednesday in Amman, along with the US Deputy Assistant Secretary of State for Energy Diplomacy Amos Hochstein and US Ambassador to Jordan Stuart Jones.Houston-based Noble Energy holds 36 percent of the 282 billion-cubic-meter Tamar basin, while Delek Drilling and Avner Oil Exploration – both subsidiaries of the Delek Group – each own 15.625%, Isramco owns 28.75% and Dor Gas owns 4%.“Noble Energy is excited about this deal, the first export agreement from Tamar,” said Lawson Freeman, Noble Energy’s vice president for the eastern Mediterranean. “This deal will pave the way for additional export projects which could enhance regional cooperation, as well as provide additional supply to the domestic market and increased security of supply through development of additional reservoirs and infrastructure. I would like to express my gratitude to the United States State Department for their role in advancing this tremendous opportunity.”Under the agreement, gas sales will be based on a starting price of at least $6.50 per thousand cubic feet of natural gas, linked to the Brent crude oil price index. Noble will also charge about $0.2 per thousand cubic feet for marketing and sales services for the transfer of gas to Jordan.The completion of the sale is subject to customary compliance conditions, including regulatory approval.As part of the agreement, until Tamar is producing at full capacity, the buyers will get limited quantities of gas from the reservoir during peak consumption months, due to the need to first supply gas to domestic customers in Israel, according to a report submitted to the Tel Aviv Stock Exchange by Isramco. The buyers have committed to pay for a minimum annual volume of gas, the report adds.
Advertisement
Subscribe for our daily newsletter