The United States apparently intends to ignore Lavrov’s sage advice and continue to pursue its Syrian policy to oust Assad. 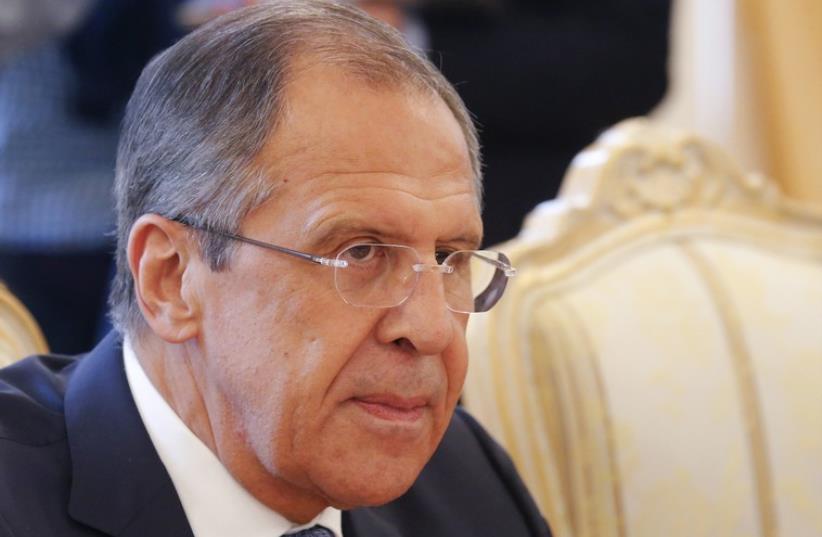 Russian Foreign Minister Sergei Lavrov in Moscow, Russia, May 28
(photo credit: REUTERS)
Advertisement
Russian Foreign Minister Sergei Lavrov has called on the United States to end its attempt to remove Syrian President Bashar Assad from power in return for Russia’s co-operation on militarily confronting Islamic State.Lavrov reportedly told Bloomberg on June 2: “The US’s 'obsession' with Assad isn’t helping in the common fight against the threat from Islamic State…People put the fate of one person whom they hate above the fight against terrorism. Islamic State can go 'very far' unless stopped, and air strikes alone 'are not going to do the trick.' “If people continue to acquiesce with what is going on and with those who categorically refuse to start the political process until Bashar Assad disappears, then I’m not very optimistic for the future of this region…”The United States is part of the Friends of Syria core group known as the London Eleven that has been assisting rebel forces in Syria attempting to overthrow Assad.The Syrian president – backed by Russia, Iran and Hezbollah – has rebuffed such attempts during four years of horrendous conflict that has so far seen over 220,000 Syrians die, four million citizens made refugees and another 7.6 million internally displaced. A report published by the UN in March 2015 estimates the total economic loss since the start of the conflict at $202 billion; and that four in every five Syrians now live in poverty – 30% of them in abject poverty. Syria's education, health and social welfare systems are also in a state of collapse.The United States apparently intends to ignore Lavrov’s sage advice and continue to pursue its Syrian policy to oust Assad. US State Department spokeswoman Marie Harf told reporters in Washington that “we’re certainly not going to coordinate with a brutal dictator who has massacred so many of his own citizens. That is just an absurd proposition. That's certainly not going to happen.”Lavrov’s comments come at a time when Islamic State – already controlling large parts of Syria and Iraq, greater in size than the United Kingdom – continues to make further advances, recently seizing the city of Ramadi, which sits 110 kilometers west of the Iraqi capital Baghdad. The terror group has also captured the strategic northern Syrian city of Palmyra – a World Heritage-listed site containing the monumental ruins of one of the most important cultural centers of the ancient world.Islamic State reportedly controls up to 80 percent of oil fields in Syria and has sold looted antiquities in Hatra, Nimrod and Mosul to acquire a major source of its funding, sometimes for seven-figure sums.The American-led coalition of some 62 states, which met in Paris this week, has proved totally unable to stem the advance of Islamic State in its stated objective of restoring the Islamic Caliphate and Sharia law wherever it seizes territory.Graeme Wood, a contributing editor at The Atlantic, sums up Islamic State’s vulnerability: “If it loses its grip on its territory in Syria and Iraq, it will cease to be a caliphate. Caliphates cannot exist as underground movements because territorial authority is a requirement: Take away its command of territory, and all those oaths of allegiance are no longer binding.”Only a UN-sanctioned military force can hope to achieve this objective.US President Barack Obama and Russian President Vladimir Putin need to urgently seal a deal that sees:
1. A UN-led process on the political future of Syria being undertaken without first removing Assad
2. A UN Security Council Chapter VII Resolution passed under Article 42 of the UN Charter authorizing military action against Islamic State.Senseless head-butting needs to give way to sensible brain-storming.